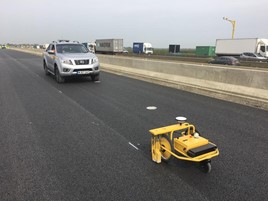 A robot is saving drivers on England’s busiest roads from hundreds of hours of disruption, according to Highways England.

The machine uses precise positioning technology to mark out where white lines need to be painted on new or resurfaced roads.

It has already saved hundreds of hours of working time on various Highways England projects across the country, including Britain’s biggest road upgrade, the £1.5 billion A14 Cambridge to Huntingdon improvement.

It also recently pre-marked eight miles of the M6 in Staffordshire in four hours. This work would usually take two engineers over a week to complete.

Savings elsewhere include saving 27 hours of working time marking three miles of hard shoulder on the M4 in Berkshire, 77 hours covering five miles of the M6 in Warwickshire, and six hours working on two miles of the M1 in Leicestershire, with further work done on the M60 smart motorway at Manchester.

Besides helping drivers, it also has safety benefits for roadworkers and enables them to focus on completing other essential work on each project.

Julian Lamb, construction director on the A14 where the robot has been used, said: “We’re always looking at innovative new ways of working, which can help road users, and make our projects more efficient while supporting improved engineering.

“With safety our top priority, the time savings the robot can provide, coupled with removing our operatives from a potentially hazardous situation, make it a great solution.

“We’ve also been working with a self-driving dumper truck on the project, completing trials of these new technologies to help Highways England more deliver its ambitious programme of roads improvement quickly, safely and efficiently.

“These technologies are also supporting new jobs, with the engineers of tomorrow needing to learn new skills such as programming this autonomous equipment.”

Ordinarily, pre-marking road markings is a time-consuming job, calculating the positioning of the markings and walking several miles to spray or chalk them on the road.

By using the robot, road workers spend far less time in the road and are at less risk of an accident - around 250 drivers illegally drive into roadworks every month, putting workers’ lives at risk. Bending down to pre-mark roads by hand can also raise the risk of back injuries. The robot also boasts improved accuracy and can mark the road faster.

A change in legislation to allow companies greater access to road data could help drivers avoid congestion, says the Government.

New A14 bypass to open a year early

Fleet operators will benefit from a brand new dual carriageway in the East of England, opening a full year ahead of schedule in December 2019.