The breakdown data, released to coincide with National Pothole Day, also showed that of all the breakdowns experienced by RAC members in 2019, just short of 9,200 were for pothole-related faults such as distorted wheels, broken suspensions springs and damaged shock absorbers.

While this was down from 13,000 in 2018, a year which saw a dramatic increase in potholes following the so-called ‘Beast from the East’, it still represented 1.1% of all breakdowns attended.

RAC head of roads policy Nicholas Lyes said: “We might so far be experiencing a milder but wetter winter than in the last couple of years, but our figures clearly show the problem of potholes has not gone away.

“Our patrols are still attending on average around one pothole-related breakdown every hour of the day.”

The RAC’s Pothole Index, which is an accurate long-term indicator of the health of the UK’s roads, suggests the widespread problem of potholes and poor-quality roads remains as the Index currently stands at 1.7, down from 1.8 in the third quarter of 2019.

This means drivers are 1.7 times more likely to break down as a result of pothole-related damage than they were back in 2006 when the RAC first started collecting data.

Lyes continued: “We anticipate the Government will pledge further funds to help cash-strapped councils mend potholes in the March Budget, but such pledges are only chipping away at the problem, and they’re unfortunately not addressing the root cause of why so much of the UK is still characterised by crumbling road surfaces.

“What we need is for central Government to think differently about how councils are funded to maintain the roads under their control.

“Short-term commitments of cash, while welcome, are not enough on their own – councils need the security of long-term funding so they can plan proper preventative road maintenance.”

Lyes believes a solution to the UK’s long-term pothole problem is possible. “From this year, the money raised from vehicle excise duty in England will be ring-fenced to help fund motorways and major A-roads over successive five-year periods,” he said. “But as yet, there is no similar model for local roads where the vast majority of drivers begin and end their journeys.

“We believe this could easily be changed by ring-fencing 2p a litre from existing fuel duty revenue to generate £4.7bn of additional funding over five years.

“Pothole-free roads shouldn’t be a ‘nice to have’ in 2020, drivers should surely be able to expect the vast majority of roads they drive on to be of a good standard, especially given they pay around £40bn in motoring-related tax every year.” 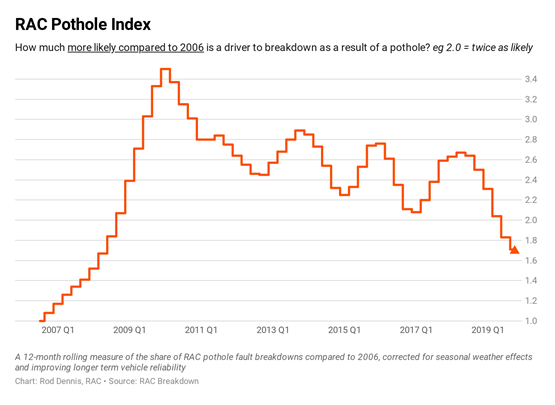 Researchers from car leasing giants LeaseCar.uk have revealed the English councils that received the highest number of compensation requests from vehicle owners due to pothole damage over 2018-2019.

They have also revealed the amounts paid out to motorists, with Surrey topping both lists.

A total of 37,578 relevant claims were made across England during the period in question, with poorly maintained roads meaning councils compensated motorists to the tune of £3.5 million.

Hampshire (2,665), Hertfordshire, Kent and Northamptonshire County Councils also faced over 2,000 claims each throughout 2018-2019, with counties such as Essex (1,841) and West Sussex among those comfortably topping 1,000.

Other local authorities paying out substantial amounts of compensation include Bury Metropolitan Borough (£217,992.15) in Greater Manchester. 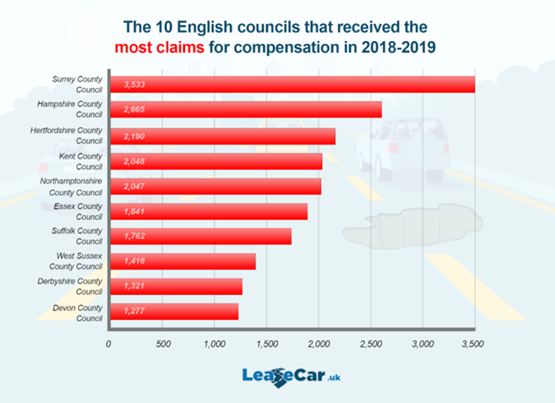 The only councils that didn’t have to use a single penny of taxpayers’ money to compensate motorists were the Greater London Boroughs of Islington and Sutton.

Rotherham Metropolitan Borough Council, Sefton Borough Council on Merseyside and St Helens Council were among others to keep compensation for pothole damage to a minimum.

Only two claims were issued, meanwhile, against Richmond upon Thames Borough Council – 21 less than any other area in England. 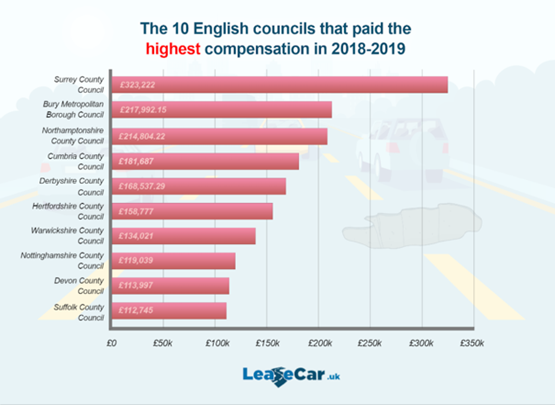 A spokesperson for LeaseCar.uk said: “Taking greater steps to repair and prevent potholes would improve safety for road users and be popular among the voters across the country that councillors are accountable to.

“It could also ultimately reduce councils’ costs by bringing down the number of successful compensation claims by long suffering vehicle owners.

“We’d advise any driver who drives over a significant pothole, or is worried their vehicle may have been damaged, to urgently check their tyres and suspension.”

The data was obtained by Freedom of Information request and covers the period January 1 2018 to October 17 2019.

The full breakdown of English councils and their claims for compensation is available here.

To report a pothole, or to find out if you suffer from damage from one and wonder if you can claim for compensation, visit the RAC’s pothole online guide.

Local authorities are filling a pothole every 17 seconds, but still paid out £6.9m in pothole compensation claims, according to this year’s ALARM survey.