Fleets and drivers lose time and money to congestion 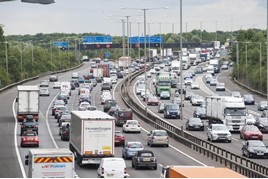 Latest statistics have revealed that UK drivers lost 115 hours and £894 a year to congestion in 2019.

Data published by the Inrix Global Traffic Scorecard has revealed that congestion cost the UK economy £6.9 billion last year, which works out an average of £894 per driver.

The results follow the release of Government statistics last week that showed that drivers in the UK spent more time stuck in traffic last year (2019) than the year before.

Trevor Reed, transport analyst at Inrix, said: “Congestion costs drivers, businesses and the UK economy billions of pounds each year. With the rising price of motoring, consumers are getting hit hardest.

“With the UK budget due soon, hopefully the Chancellor will take the opportunity to address this issue with continued investments in transport networks.”

Cardiff saw the largest growth in congestion increasing 5% to 87 hours per driver, whilst Nottingham’s congestion decreased by 17%.

The A404/A501, A4 and M25 were the most congested corridors in the UK, losing commuters 44, 40 and 36 hours respectively. Outside the capital, commuters in Birmingham and Bournemouth on the A38 and A338 experienced yearly delays of 32 hours.

Reed believes that the High Speed 2 (HS2) rail network has the potential to reduce car use in the long run by ‘creating a seamless network of rail connections between the UK’s employment hubs’.

The first phase of the route will run between London and Birmingham, with a second phase going to Manchester and Leeds.

If you want to read the full Inrix Global Scorecard, you can find it here: https://inrix.com/scorecard/

Drivers in the UK spend more time stuck in traffic