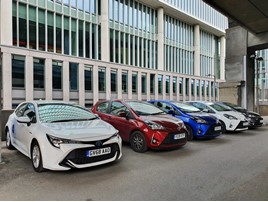 Toyota’s entire fleet of Hiyacar rental vehicles have been made available to London’s NHS staff and key workers, with rental fees scrapped, to support the COVID-19 relief effort.

The cars listed on the car sharing service, previously used for short-term private rental, are being driven by NHS staff and other key workers to allow for safe and efficient commuting and to enable critical medical rounds to continue, it said.

A total of 31 Toyota cars are available through Hiyacar – a peer-to-peer car sharing service – ranging from the Aygo city car to the RAV4 SUV, meaning that essential journeys can still be carried out, whether those journeys involve a safe and isolated commute or the transportation of vital equipment.

As a result, to date, 571 days’ worth of free Toyota rentals have been made use of by key workers. With rental fees waived, the only cost to key workers is an insurance premium, which averages out at £9 per day.

Working with Hiyacar, the Toyota fleet has been positioned in locations that allow for fast access and where demand for essential personal transport, within and around London, is high.

For example, yesterday five cars were positioned at St Mary’s Hospital, Paddington; there were four cars based at Queen’s Hospital, Romford and three cars at Charing Cross Hospital.

Paula Cooper, director of Toyota GB’s customer insights division, ConsumerOne, said: “Our support of Hiyacar’s initiative to keep key workers moving seemed like a simple gesture at the outset but to see the extent of what has been achieved with a relatively small number of cars – well over a year’s worth of loans – is really heart-warming for all of us here.

“As well as enabling safe commuting, we recently learned of a nurse in Leatherhead who uses one of our cars four days each week to administer home-testing for disabled patients and we know that a wide range of key workers, ranging from pharmacists to physiotherapists, from social workers to scientists have all been able to continue carrying out their duties thanks to Hiyacar’s rental fee waiver programme.”

According to data provided by Hiyacar, doctors have been the greatest users of Toyota cars, followed by nurses and then police officers.

Records show that key workers in more than 20 areas of specialism have used Toyota’s Hiyacar fleet since the rental fee waiver scheme started at the end of March.

Cooper continued: “Alongside what we’re doing with Hiyacar, Toyota staff have worked exceptionally hard to contribute to the national relief effort and we thank them for their dedication.

“Technical colleagues have worked with the NHS to help maintain and refurbish medical equipment and to work on the supply of respirator hoods.

“I know of individual efforts, including staff who have been sewing surgical scrubs, and there are many examples from within our retailer network of donations made to charitable funds and of help provided directly to key workers.”

The Hiyacar rental waiver scheme is available to NHS staff and key workers and can be accessed via hiyacar.co.uk.

Rental fees for key workers have been dropped, with a payment to cover insurance being the only cost.

Hiyacar is able to move cars to locations such as hospitals and key worker homes to aid with essential transport requirements.

Allianz Insurance is transitioning its fleet away from diesel to hybrid power, after securing a fleet deal with Toyota and Lexus Fleet Services.

Toyota has revealed an all-new model, the Yaris Cross, set to compete in the popular compact SUV segment alongside the Renault Captur and Ford Puma.

Toyota is expanding the Corolla range with a new Trek model, offering a raised ride height and extra interior protection.