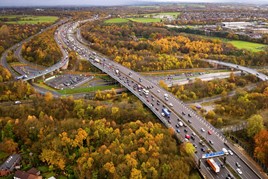 Highways England has "delivered most of its commitments" and made "good progress" over the first road period, but the programme set out for major improvements was "too optimistic", according to latest Office of Rail and Road (ORR) report.

The company must also continue to improve safety for all road users, further involve its customers into planning and decision making, and work even more efficiently over the second road period (RP2), the report found.

The ORR had made observations on the delivery risk of the programme which saw re-planning from 112 schemes that were due to have started construction in the first road period to 73, agreed with the Department for Transport (DfT).

ORR said further hard work is required however if Highways England is to meet its safety target for 2020; and further investment is needed to meet its longer-term goal: that nobody should be harmed on the network by 2040.

John Larkinson, chief executive of the Office of Rail and Road, said: "Over the last five years Highways England has made very good progress and we have seen it meeting almost all of the targets it was set. We have pushed Highways England hard to deliver on safety, efficiency and meeting the needs of road users.

"Highways England’s task is going to get bigger, as it needs to deliver a larger programme of works set out in the Government’s 2020 Road Investment Strategy, and we will continue to provide close scrutiny."

The five-year assessment marks the end of the first road period. ORR says it has played a vital role to improve the transparency and quality of Highways England’s financial reporting – with the company delivering £1.4bn efficiency savings over five years.

Highways England was set up in 2015 as a result of the UK government’s programme for roads reform, and the ORR took on its scrutiny role.

The Office of Rail and Road (ORR) is the UK’s rail regulator and strategic roads monitor for England.

Highways England and Loughborough University project will look at the challenges connected and autonomous vehicles (CAVs) could face on motorways.