Mileage discrepancy could affect 2.5m vehicles in the UK 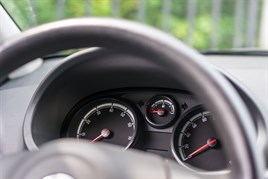 It is estimated that almost 2.5 million cars in the UK have a recorded mileage discrepancy, according to a study by Rapid Car Check.

Based on a sample size of 4m cars and vans, the company found that 6.3% of vehicles had a recorded mileage discrepancy.

This is caused when the recorded mileage drops between MOT tests or if there is a mixture of odometer reading in miles and kilometres.

Almost 6% were highlighted for having a negative mileage variation between MOT tests, suggesting the mileage was altered or the odometer was replaced between tests.

The Citroen Dispatch was found to have the largest mileage discrepancy, with 31% of vehicles checked failing the Rapid Car Check test.

The Renault Scenic and Grand Scenic were found to be the most affected cars, with the highest volume of recorded discrepancies. Although, these cars were known to suffer with a faulty instrument cluster which may have been replaced legitimately in a number of cases.

As this study only looked at recorded mileages at the time of the MOT test, it does not account for vehicles that were clocked prior to a test, such as those that are less than three years old, and therefore does not give a truly accurate representation of clocking.

In a previous study carried out by Rapid Car Check, the company found that, on average, vehicle mileages were reduced by 70,000 miles in the cases where discrepancies were found.

Only vehicles with more than 1,000 ‘fails’ were included in the data, which can be viewed here.

Top 20 cars and vans with the most mileage discrepancies:

In the past five years, Cap HPI says the number of vehicles with mileage discrepancies has increased by 45%.

The EU estimates between 5-12% of used cars sold inside EU countries and 30-50% of those sold across borders within the EU have been clocked.

Industry data and technology company Cap HPI has led industry support for MEPs who have called for new legislation to combat odometer fraud.

Vehicles most likely to be 'clocked' revealed by HPI

Automotive data experts at HPI crunched the numbers to reveal that minibuses top the chart of vehicle types most likely to have a mileage anomaly.

The number of vehicles with a mileage discrepancy has increased by 22% year-on-year, according to Cap HPI.