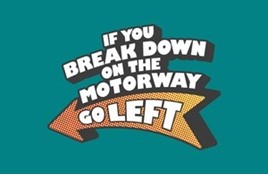 Highways England has launched a new campaign advising drivers to “go left” if they break down on the motorway.

The multi-million pound exercise is aimed at improving safety on smart motorways following a review by the Transport Secretary last year.

It is being supported by partners across the recovery industry and independent road safety campaigner Meera Naran.

Set to the tune of the Pet Shop Boys’ hit version of the ‘Go West’ song, the advert delivers a clear, single-minded message – go left.

Highways England Acting Chief Executive, Nick Harris, said: “No one plans to break down on a motorway, but if the unexpected happens then I want all motorists to know what to do so that they can keep themselves and others safe.

“Everyone wants a safe journey and raising awareness is a vital part of helping to make sure that happens.

“This new campaign and its ‘Go left’ message is designed to deliver crucial information in an accessible way and to help make motorways safer for the people who use them.”

The campaign is part of an 18-point action plan set out in the Evidence Stocktake published by the Department for Transport in March last year.

The Transport Secretary called on Highways England to deliver the campaign to improve safety and public confidence on smart motorways. However, the Transport Committee has launched a seprate inquiry into the benefits and safety of Smart Motorways in response to numerous calls for them to be scrapped.

Campaigners against Smart Motorways have labelled them as ‘death traps’. One coroner concluded that smart motorways ‘present an ongoing risk of future deaths’ while another has referred Highways England to the Crown Prosecution Service to consider if corporate manslaughter charges are appropriate following the 2018 death of a grandmother on the M1 in South Yorkshire.

Meera Naran is campaigning for Safer Drivers on Safer Roads following the death of her eight-year-old son Dev on the M6. She said: “Having successfully campaigned for the implementation of the 18-point safety plan – this education campaign is an integral step in the right direction to support motorists.”

In 2019 there were almost 230,000 reported breakdowns across the Highways England network including around 207,500 on motorways. In the 12 months from June 2019, around 40,000 breakdowns were recorded as being due to tyre issues while more than 6,000 incidents were a result of vehicles running out of fuel.

AA president, Edmund King OBE, added: “As motorway design has changed since many of us passed our test, it is vital to inform drivers what they should do in rare but worse-case scenarios.

“This welcome new campaign reminds drivers to ‘go left’ should their vehicles develop faults and if possible, get off the motorway. However, if they can’t, then they should head for the next emergency zone.

“Some breakdowns can be avoided completely, so drivers should take five minutes before setting off to ensure their tyres are inflated correctly, that they have enough fuel or electric charge and that engine fluids are topped up.”

A coroner has asked the CPS to consider a charge of corporate manslaughter for Highways England after a woman was killed on a stretch of smart motorway.

The Transport Committee has launched an inquiry into the benefits and safety of Smart Motorways following numerous calls for them to be scrapped.