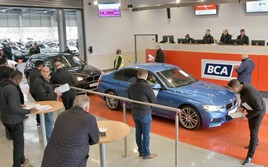 The data provider’s daily Live trade values show that, on average, trade prices for used cars have increased by £1,700 or 13.5% in the last three months.

In June alone, the average used car price was up 4.8%.

“With stock-turn high, this has led to retailers requiring a constant supply of cars to replenish their forecourts,” said Derren Martin, head of valuations at Cap HPI.

“Well-documented new car supply issues resulting from several component shortages, have led to fewer fleet returns and part exchanges. This has caused demand to outweigh supply for the third month running,” he added.

Martin concluded that even if demand dips from its current levels, supply is still going to be lower than normal for some time yet.

He said: “With new cars being in such short supply and likely to continue to be so for at least the next quarter, there is no bow wave of fleet returns coming through. One million less cars have been registered than would reasonably have been forecast over the last 18 months. These cars are lost to the used car market. It will be a while before supply outweighs demand again.”

Double digit increases reported in used car prices in recent months are likely to continue and could go even higher, says the VRA.