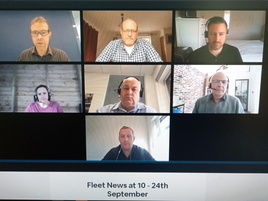 Fleet News at 10 panellists criticised the Government’s attempts to ease the shortage of HGV drivers by proposing drivers only take one test for both rigid and artics, instead of two separate tests, plus removing the reverse exercise element from the test.

Matt Hammond, head of fleet at M Group Services, said: “It’s ridiculous. You need to work up to an artic – it’s an incredibly skilled job and you learn your trade as you go through from 7.5-tonne to rigid to artic.”

“I’m hoping the changes don’t come in. It’s a sticking plaster, a reaction not a response. There is no respect for what is an incredibly skilled job,” she said.

“It’s hard to recruit young people and females when you have shoddy facilities out on the road. We expect people to work overnight unsavoury hours, not get as much money for it – there’s just no respect. We have to make this industry attractive again.”

Viewer Renny Thomson, a former LGV driver and instructor and now a health and safety adviser, agreed that the underlying root cause of the shortage is “the way that drivers are treated - by the general public and motorists, by the distribution centres where they deliver, by the Government for not having a policy to encourage truck stops and by motorway services not being fully open overnight to provide welfare facilities”.

However, he added that the proposal was to move assessment of reversing and coupling/uncoupling out of the DVSA Testing procedure so that it was carried out by 3rd party training providers. They would, he insisted, still be tested/assessed on their ability to reverse.

Hammond responded: “For me, the concern is it’s fast tracking the whole process and the experience the driver will get from working through the system. It takes years to get the experience; they are looking to short-cut a system that shouldn’t be short-cut.”

Meanwhile, viewer Graham Telfer, fleet manager at Gateshead Council, had concerned over the skills and knowledge of some trainers, pointing out: “Unlike car driving trainers who are on Government Register, HGV trainers are not required to register or have a qualification.”

Also debated on the latest Fleet News at 10 were:

To find out the panellists’ views on these topics, click here to view the webinar.

Fleet News at 10 panellists are: