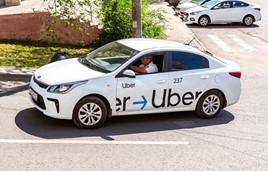 Uber customers in the UK could be hit with higher fares after the ride-hailing firm lost a High Court case.

The High Court has ruled that it is unlawful for a private hire vehicle (PHV) operator to act as an “agent” between a driver and a passenger.

Uber had claimed it acted as an agent for bookings, with the contract made between drivers and passengers, but the decision now means that drivers are working for the operator and leaves the firm potentially liable for VAT.

The ruling will not just impact Uber in London as almost all the estimated 1,832 Transport for London (TfL) licensed operators have used this model since regulations were introduced in 2002.

The High Court judgement follows a separate ruling, earlier this year, which found Uber drivers should be treated as workers not contractors.

At the time, Lord Justice Leggatt suggested this ruling meant that a private hire operator such as Uber had to enter into a contract with its customers when it accepted a booking, rather than the passenger only having a contract with the driver of the vehicle.

Unlike most private drivers, Uber is a VAT-registered business, so this would oblige the ride-hailing firm to start charging the tax.

GMB, the drivers’ union, says that the court’s decision confirms London private hire drivers are legally classed as workers and must be treated as such.

Mick Rix, GMB national officer, said that the ruling provides “clarity” and backs up what GMB has been saying for years – “private hire drivers are workers and must be treated as such under law”.

He added: "It means TfL’s guidance is now incorrect and it means most operators are acting illegally and must get their house in order.

“GMB urges private hire operators such as Bolt and Addison Lee – who still refuse to give drivers the rights to which they are legally entitled – to change their business models in light of today’s judgement.”

A spokesperson for Uber said: "Every private hire operator in London will be impacted by this decision and should comply with the Supreme Court verdict in full."

A spokesperson for Transport for London (TfL), which regulates private hire operators in London, said it "notes" the judgement.

"All operators will need to carefully consider the court's judgment and take steps to ensure that they comply with it, including considering whether any changes to their way of working are required," he added.

The case referred to the Private Hire Vehicles (London) Act 1998 which only applies in the capital, but Uber and the App Drivers and Couriers Union, which was a defendant in the case, both expect the ruling to be followed by licensing authorities across the UK.

George Maier, a fellow at the London School of Economics specialising in platform economics and worker relations, told the Financial Times that if Uber is forced to pay VAT it would face a "substantial" tax bill with prices having to be increased to cover the costs.

In a filing to the Securities and Exchange Commission in 2019, the FT says Uber warned that HMRC could impose a 20% VAT bill on gross bookings or on the service fee that the company charges drivers if it determined it was a transport provider. At the time, sources told the FT that the bill could be more than £1 billion.

The UK Supreme Court has ruled Uber must classify its drivers as workers rather than self-employed, which could have wider consequences for the gig economy.

Arrival to make an electric car for Uber drivers

Electric commercial vehicle brand Arrival will develop an electric car to be used by ride-hailing drivers.