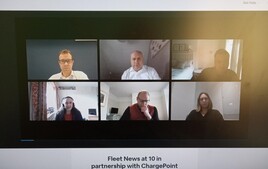 Discussing the new ‘Hierarchy of Users’ regulations during the January Fleet News at 10 broadcast, sponsored by Chargepoint, fleet panellists welcomed any measures which prioritise the safety of vulnerable road users, such as pedestrians and cyclists. However, they believed that unscrupulous miscreants could exploit the revisions to make false injury claims, particularly against fleet operators with branded vehicles.

The changes are divided into three rules:

M Group Services head of fleet Matt Hammond, posting in the chatroom, raised concerns about the change in liability, “especially when a pedestrian walks out without looking. It means dashcams will become more relevant and crucial in defending potential claims”.

Lorna McAtear, National Grid fleet manager, agreed: “We will see initially an increase in crash for cash until people realise that fleets do have cameras. Fleets need to be wary of this – it will be a genuine issue.”

Paul Hollick, chair of the Association of Fleet Professionals, said: “There is a chance that, in urbanised centres, there will be people just jumping out in front of vans to see what happened and to get the police involved for prosecutions. From a fleet perspective, branded vans particularly could be a potential problem for some fleets.”

Despite the concerns, fleets were unanimous in their view that the changes were a positive move that needed to be clearly communicated to all staff.

Duncan Webb, head of fleet and travel at ISS UK and Ireland, said: “We have communicated it to everyone in our business because everyone is now seen as a road user, even pedestrians.”

He described the focus on vulnerable road users as “sensible”, and pointed to amendments which could actually protect drivers, such as the requirement for cyclists to leave at least a metre when overtaking a parked car.

“So even if somebody didn’t follow the Highway Code when opening their door, the cyclist also wouldn’t have followed the Highway Code if they crashed into it,” he said. “In some ways it’s very logical in its sequence.”

Among the other topics debated were:

Register for the February Fleet News at 10 webinar, which will be broadcast live at 10am on February 25.

Topics for discussion will include:

Further updates to the Highway Code

Implications of shortages for aftersales downtime and parts availability.