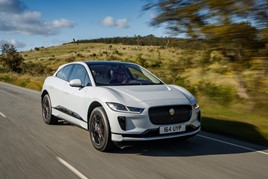 Jeff Smailes marketing and administration manager, fleet and business sales, at Jaguar Land Rover UK, talks to Fleet News at Company Car In Action 2018 about the significance of the I-Pace (pictured) to Jaguar – and the target market for the all-electric addition to the model range.

Which models have been the most popular with fleets on your stand this year and why?

CCIA saw the first public drive of the I-Pace.

To-date is has been driven by Jaguar Land Rover staff, retailers and the press and isn’t launched until early July.

People are realising that first and foremost it’s a fantastic car that happens to be electric.

With the Government’s aim to have no new cars powered by internal combustion engines by 2040, fleet managers are looking for alternatives.

The choices are limited: at CCIA Jaguar Land Rover has more pure electric cars on its stand (13, including 11 to drive) than all the other manufacturer put together.

What is your priority this year and why?

We are trying to secure a number of key fleet deals with the I-Pace, particularly in the chauffeur market in and around London.

The city is ahead of the rest of the country in introducing an ultra-low emission zone, the Government is based there and has made a commitment to a proportion of its fleet to be electric and the Metropolitan Police wants to take diesels from its fleet.

Each of those opportunities brings with them high visibility for the brands.

A chauffeur car is on the road for 80-90% per cent of the day. A chief executive’s I-Pace could spend the same proportion of the day in an underground car park unseen.

And we want to use I-Pace to promote the Jaguar brand and image. We re-launched with the F-Type, built on the back of that with the XE and refreshed the XF.

Since then we’ve brought out the F-Pace, the E-Pace six months ago and now the I-Pace. We will hit our targets. We haven’t failed to for the last few years.

What are your fleet sales expectations this year and longer term (including your predictions on how fuel type split is changing/might change)?

The mix in fleet of plug-in pure electric and hybrid vehicles is already ahead of what it is in retail.

Most popular articles in CCIA News

Jaguar Land Rover has made a commitment that from 2020 all its new vehicle ranges will be available with electrified powertrains.

The I-Pace is a welcome addition to the premium EV sector. It’s capable and impressive in many areas. Its timing should give it a head start over its premium rivals.