"There should be no doubt that the I-Pace is absolutely competitive where it matters when it comes to the latest EV technology, performance and space." 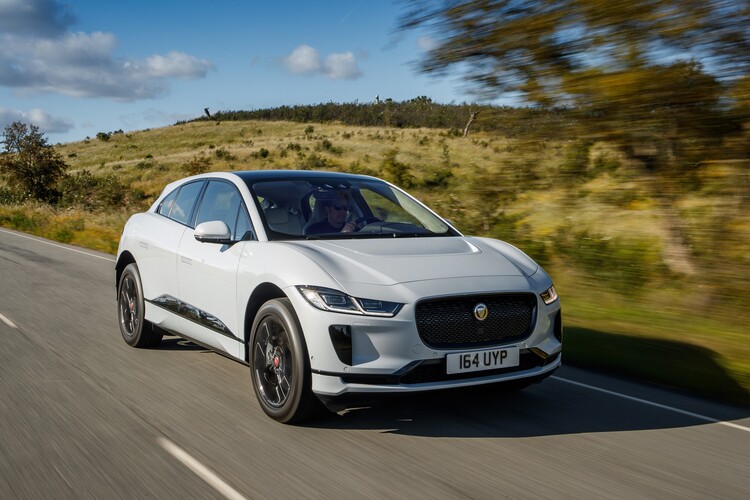 We first saw a concept version of the new electric Jaguar I-Pace at the Los Angeles motor show in November 2016, and while it is now available to order with customer deliveries this summer, it has a feeling of being launched some time ago.

Perhaps this is because Jaguar’s last two major new vehicle launches have been SUVs, and in just two years we are welcoming a third member of the ‘Pace’ family.

But there should be no doubt that the I-Pace is absolutely competitive where it matters when it comes to the latest EV technology, performance and space.

The production car remains remarkably close to the concept car we saw more than 18 months ago, with its huge 2,990mm wheelbase, bonnet scoop to aid airflow over the car, and an additional aerodynamic rear wing that directs air down the rear window, eliminating the need for a rear wiper.

Jaguar design director Ian Callum said work began on the car more than four years ago, and his department was instructed to start with a clean sheet of paper, carrying over no significant components from other models.

Although broadly speaking the I-Pace is a crossover, Callum says he was able to use styling cues from Jaguar’s C-X75 mid-engine supercar concept.

The use of a crossover silhouette ensured no packaging compromises compared with finding space for electric powertrain components in a saloon or hatchback, while the absence of an engine allowed the cabin to be moved forward, maximising interior space.

Battery cells are contained within the floor of the vehicle, and this low-mounted mass helps reduce the car’s centre of gravity by 130mm compared with an F-Pace.

There are three equipment grades: S, SE and HSE, with the entry level car starting at £63,495 on the road, while the limited run First Edition is priced at north of £80,000. All models currently qualify for the maximum £4,500 plug-in car grant.

With a power output of 400PS and maximum torque of 513lb-ft available from a standing start, the I-Pace is a fast car, despite its 2,100kg-plus kerb weight.

Power is deployed via two electric motors, giving the I-Pace the traction advantage of all-wheel drive, and the 0-60mph sprint is achieved in 4.5 seconds.

Maximum range of the I-Pace is 298 miles under WLTP measurements, and it should comfortably achieve more than 200 miles without a charge in normal driving.

It has been engineered to accommodate 100kW charging when it becomes available (allowing 0-80% in 40 minutes), but with a 7kW wallbox can be charged from empty in around 12.5 hours, and from a 50kW rapid charger to 80% capacity in around 80 minutes.

We drove the I-Pace on a variety of roads, where it performed effortlessly. Silent in slow traffic, savagely fast on the open road when needed for overtaking; always comfortable, even on the 20-inch wheels of the road-going test cars.

We also tried it on the track, where the car felt remarkably composed. With an electric motor front and rear, the car manages torque independently at each axle, improving stability and traction.

Regenerative braking can be set in two stages, and on the highest setting eliminated the need to use the brake pedal unless you need to stop the car suddenly.

We drove the I-Pace on an off-road route that would have been too challenging for a conventional car. The I-Pace is available with air suspension, and can increase ground clearance for obstacles. The car is also rated for a wading depth of 500mm.

There is plenty of legroom, luggage space (with a 10-litre cubby in the centre console and a 27-litre compartment at the front, in addition to the 656 litres minimum in the luggage compartment and 1,453 litres with the rear seats folded).

Interior quality is typical of a Jaguar – perhaps without the bulletproof feel of an Audi, but extremely tastefully appointed.  It has a dual touch screen in the dashboard, with the upper screen for most functions and lower screen and rotary controls for temperature and seat settings.

Jaguar insists that some tactile controls were maintained for ease of use instead of containing them behind sub-menus on the upper screen.

There are few immediate rivals for the I-Pace. It’s a little smaller than the Tesla Model X, and the Tesla is a little faster in its higher specification, if not quite enjoying the same consistent build quality that we expect from most car manufacturers.

By the end of the year, we will see a challenge from Audi in the new e-tron electric car, and other premium manufacturers have EVs in the pipeline.