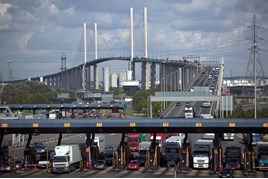 A poll by parking firm APH has shown 54% of motorists want more time to pay toll charges at the Dartford crossing.

The poll was prompted after more than 220 comments were posted with many drivers complaining they had fallen victim to inadequate signage and unrealistic time constraints for paying the toll – which must be settled by midnight the following day.

Results revealed that a majority of 54% thought giving more time to pay the charge was the best way to improve the service and help cut the number of motorists being hit by fines of up to £105.

Seemingly appreciative of the improvement in travel times brought about by the automatic charging, just 16% favoured a return to tolls being collected by staff in booths, while options that more information should be published in the press or sent with DVLA reminders were also shunned; with just 3% and 2% (respectively) in favour.

There was some overt support for the new system, though, with 3% of those who took the poll suggesting that drivers should stop moaning, take responsibility and get used to the new system.

What would improve the Dartford Crossing toll system?