Company driver calls time on mobile phone use after course 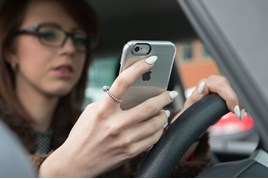 An employee caught by police using his mobile phone while driving says he would never do it again after attending a special course for offenders.

Landscaper Chris Snowden (36) volunteered to attend a course after police drove alongside him as he checked work emails on his phone.

He says that driving is now "much less stressful" and he only checked emails at the end of a journey when the ignition was switched off.

"I knew using my phone while driving was illegal so I started the course thinking I'll get through this and avoid the three points," said Snowden.

"But I walked out of the course thinking I could be the next news story on a family killed by a driver not paying attention to the road, using a mobile."

The TTC Group road safety organisation has worked with a number of police forces, and organisations across the UK to deliver specialist half day behavioural change courses aimed at changing the way drivers think about risks.

With the aim of reducing casualties, they educate 330,000 road users each year on a variety of police "diversionary" courses, offer workshops and use TTC DriverProtect, an online solution to help employers measure, monitor and manage their work related road risk.

Newly qualified young drivers face losing their licence and having to retake the driving test if they collect six points within their first two years of driving.

Employers who don't have processes in place to prevent staff from making or receiving calls while driving may also face serious penalties under tough health and safety laws.

Motorists who use a mobile while driving often believe they are better drivers, say TTC Group trainers. They text at traffic lights, make calls with a phone on their lap and drive through junctions chatting on a mobile clamped to their ear, oblivious of any danger.

One motorist said he was so engrossed in a phone call that he was oblivious to being followed by police. "They really do think they can multi- task and are better drivers than everyone else," said TTC Group director Alan Prosser.

"But your concentration is on the conversation and not on the road. Texting is an eyes-up and eyes down process with your gaze just on the vehicle in front and not on what is happening around you."

Course attendees take part in activities that prove they can't effectively carry out two simple tasks at the same time. "They realise that they are least aware of what's happening on the road when their attention is diverted which means that they are much slower to react and take longer to brake," said Prosser.