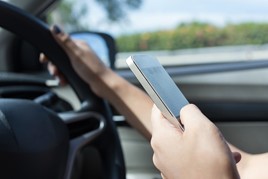 The Government has given no indication it intends to change mobile phone laws after a driver won his case in the High Court.

The Director of Public Prosecutions (DPP) had lodged an appeal with the High Court after Ramsey Barreto had a conviction quashed for filming a crash on his mobile phone.

The 51-year-old was prosecuted and found guilty after police saw him driving past an accident using his phone to make a video. However, he had the conviction overturned at Isleworth Crown Court, last October, after his lawyers successfully argued that the law only banned the use of mobile phones to speak or communicate while behind the wheel.

In its conclusion, the court said: “The legislation does not prohibit all use of a mobile phone held while driving. It prohibits driving while using a mobile phone or other device for calls and other interactive communication (and holding it at some stage during that process).”

However, when asked if it intended to overhaul the current legislation, the Department for Transport (DfT) declined to answer the question.

Instead, a spokesman insisted: “The law is clear that anyone driving dangerously is committing a criminal offence.”

Emma Patterson, Barreto’s solicitor, who successfully argued the case, said drivers who use their phones at the wheel may still be committing an offence of driving without due care and attention, or dangerous driving, “if the standard of driving falls below that expected of a careful and competent driver”.

She continued: “This is not a loophole argument. This is simply the correct application and understanding of the law as it stands.”

Frank Rogers from Just Motor Law, the motoring arm of Kirwans law firm, added that contrary to some reports, the ruling is “unlikely to open the floodgates to thousands of convicted drivers”.

“What it does do is set an important precedent which, in some cases, could lead to some successful appeals,” he said.

Currently, the penalty for making calls on a handheld device while driving is a £200 fixed penalty notice and six points, which could lead to drivers who have already accumulated points losing their licence.

Rogers continued: “This case is not a green light for people to start using their mobile devices while driving.”

Motorists can legally make a hands-free call, but if it is detrimental to their driving, the legislation that should have been used to prosecute Barreto can also be applied to a hands-free call.

This was the case following a collision involving an assistant chief constable who was attempting to make a hands-free call to her husband (fleetnews.co.uk, August 12).

Nottingham Magistrates’ Court heard Kerrie Wilson, assistant chief constable of Lincolnshire Police, had just left the force’s headquarters when she strayed on to the wrong side of the road, crashing into a Hyundai i30 travelling in the opposite direction.

The driver of the other car suffered whiplash and bruising and had to be taken to hospital.

The 51-year-old became distracted as she tried to find the Bluetooth button on the steering wheel of her Mini Countryman. She was unfamiliar with the controls because she had only just started driving the vehicle.

Wilson had pleaded guilty to driving without due care and attention, and was ordered to pay a total of £1,460 in fines and costs.

She also had seven points added to her licence.

Wilson’s conviction came as MPs on the Transport Committee urged the Government to consider banning the use of hands-free mobile phones while driving (fleetnews.co.uk, August 13).

Transport Committee chair Lilian Greenwood said: “There is a misleading impression that hands-free use is safe.

“The reality is that any use of a phone distracts from a driver’s ability to pay full attention and the Government should consider extending the ban to reflect this.”

In its Road Safety: Driving While Using a Mobile Phone report, the Transport Committee is also calling for tougher penalties and wants the Government to overhaul current laws on using mobile devices while driving to cover use irrespective of whether this involves sending or receiving data.

Almost 90% of motorists would like to see tougher penalties handed out to other drivers caught using their phone while behind the wheel according to a new survey by Motorpoint.

The effectiveness of legislation governing use of handheld mobile phone while driving has been questioned by the High Court.