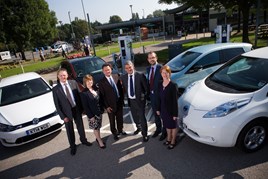 The route, stretches across the country diagonally, from Stranraer in Scotland to Suffolk in the East of England, from Hull in Yorkshire to Holyhead in north-west Wales, connecting with Belfast in Northern Ireland and Dublin in the Republic of Ireland.

The network’s 74 rapid chargers are capable of charging a typical electric vehicle’s battery to 80% in less than 30 minutes, making long-distance journeys a more realistic prospect for EV drivers – and signalling the end to plug-in vehicles being restricted to towns and cities.

According to research commissioned by the project and undertaken by Newcastle University, 72% of EV drivers are motivated to use rapid chargers to extend their vehicle’s range for longer journeys. The new Rapid Charge Network meets this demand, enabling motorists to drive further, faster.

The €7.4 million investment in the Rapid Charge Network was part-funded by the European Union’s Trans European Transport Network programme and by four major EV manufacturers: Nissan, BMW, Renault and Volkswagen alongside ESB, Ireland’s foremost energy company.ESB in Ireland and Ecotricity in the UK and are the network operators, providing power to all of the Rapid Charge Network charging stations.

The new Rapid Charge Network was implemented by Sunderland-based Zero Carbon Futures to meet increasing demand for public charge points and to encourage more motorists to make the switch to plug-in power.

A spokesperson from Volkswagen UK said: “We, and our electric vehicle customers, will welcome the development of a network of multi-standard charge points. Each charge point on the network is compatible with all standard EVs on sale today, taking away the element of confusion for drivers and providing reassurance that they can rapid charge regardless of make or model.”