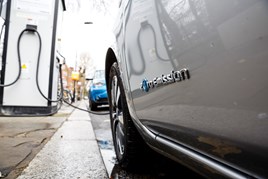 A much larger electric vehicle charging infrastructure is one of the main developments required if electric vehicle residual values are to become competitive with petrol and diesel, says Glass's.

Rupert Pontin, director of valuations, says that there is a level of curiosity among some used buyers about EVs but that the issue for most is range anxiety - something that would partly be solved by more chargers.

He explained: "Effectively, we need chargers to become as much an everyday sight as a petrol station. They have to become an accepted part of everyday life and for people to see them in use regularly.

"When that starts to happen, we believe EV residual values will start to match and possibly exceed conventional vehicles. Until then, unless there is an unlikely step change in battery technology, range anxiety will be an issue."

Rupert said that some families were buying lower cost EVs such as the Renault Zoe to use as second cars on local journeys but that even here residuals were less than conventional propulsion systems.

For example, the Zoe Dynamique Nav with batteries at 12 months and 12k with 38% retained value lagged behind the class benchmark Ford Fiesta 1.5TDCi Zetec 5dr at 52% at the same age and mileage.

"This is not the fault of the product - cars like the Zoe and the Nissan Leaf are excellent - but they will remain of minority interest until the charging issue is sorted out.

"There have been rumours recently that the Government will announce workplace charging grants sometime this year and that would be a very welcome development. Fleets may well have a part to play in encouraging widespread adoption of EVs.

"However, the issue of residual values will also be a problem for some fleets because they may make lease rates uncompetitive unless there is a high level of manufacturer support. We are very much in a cart and horse situation."