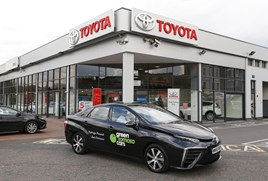 Twelve new Mirai customers, including the Science Museum, Aberdeen City Council and Arval are among the fleet operators that have been successful in a competition to share £2 million to invest in new hydrogen fuel cell cars and vans. The new vehicles should be in service by April next year.

Mirai, a mid-size four-door saloon, is powered by electricity generated on-board by a Toyota-developed hydrogen fuel cell and produces no harmful emissions when driven – in fact the only by-product is water.

The fleet funding support for hydrogen fuel cell vehicles is part of the UK Government’s commitment to a £600 million investment in ultra-low emission vehicles by 2020.

Paul Van der Burgh Toyota (GB) president and managing director, said: “We are proud to be at the forefront of bringing the benefits of ultra-low emission transport to the UK and welcome the Government’s announcement of funding that will enable more of our customers to introduce Mirai to their fleets. Toyota is committed to producing vehicles that provide sustainable mobility, developing breakthrough technologies that have successfully brought hybrid and now fuel cell vehicles to the marketplace.”

Toyota is supporting the roll-out of hydrogen-fuelled vehicles in the UK with the provision of specialist service centres for Mirai at additional locations across the country.

From next week, centres in London, Swindon, Sheffield, Swansea and Aberdeen will help extend the reach of the technology, in line with the national H2 infrastructure network plan.

The station is the second in the UK to make hydrogen on-site from solar energy, captured using an array of photovoltaic panels, and follows ITM Power’s opening of a wind-powered station in Rotherham. It is the sixth facility to be delivered by the European HyFive project, funded by the European Fuel Cell and Hydrogen Joint Undertaking (FCHJU) and the Office of Low emission Vehicles (OLEV).

Seven Toyota Mirai were among 11 hydrogen fuel cell vehicles that took part in a zero emissions rally to mark the opening of the refuelling station this week, producing nothing but water in their journey to the new facility, located close to the A13 arterial route and the new Thames Gateway development. They followed two rally routes – one a 186-mile journey from a wind hydrogen station in Rotherham, the other a cross-London trip from ITM’s refuelling station in Teddington, passing through the capital’s Low Emission Zone. Both routes were well within Mirai’s driving range of around 300 miles on a full tank of fuel.

Arval is leasing two vehicles to local companies, subsidised by the Government’s Office for Low Emission Vehicles. These are a Hyundai ix35h for the National Trust, and a Toyota Mirai for Nationwide Building Society. Arval will also be taking delivery of a Mirai to operate as part of its own company fleet. There are a number of other vehicles being delivered to local companies as part of a linked bid structure to which Arval will provide management support.

There is already one public hydrogen fuelling centre in Swindon and plans are in place to open another early in 2017.

Paul Marchment, SME development manager at Arval UK, added: “Many commentators believe that the long term solution to UK transport will be fuel cell-based and we are very keen to gain a wide range of operational knowledge.

“The first cars should be with their users by the end of this year and have been subsidised to a level that makes them cost comparable with a normal company model.

"As part of this arrangement, they will cover a minimum annual mileage of 10-15,000 miles over their three-year lease, and we will gather as much data as possible through our in-vehicle telematics service which will in turn help us to advise our customers in the future."

The Hydrogen Hub initiative aims to have a total of 11 company-run fuel cell cars operational in Swindon by the end of this year and 50 by the end of 2017. There will also be trials of fuel cell forklift trucks, buses and combined heat and power units for both commercial and domestic use.

Toyota will have a Mirai hydrogen fuel cell vehicle on display at Fleet Management Live this week. To register for your free place visit www.fleetmanagementlive.co.uk