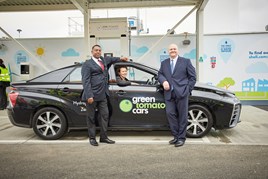 A Toyota Mirai hydrogen fuel cell car operated by Greentomatocars was one of the first vehicles to use a new hydrogen filling station on the M25.

The hydrogen refuelling station at Cobham services was opened by ITM Power, the energy storage and clean fuel company, with Shell.

“The addition of a hydrogen fuelling station south of London complements those already in operation to the east and west of London, boosting the capital’s hydrogen infrastructure.  This should encourage more companies to follow the lead in adopting zero emission hydrogen vehicles which are good for people and for the environment.”

Fleet Poll
Was it a good Budget for the fleet industry?
Vote
View all
85