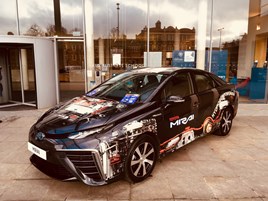 A new Hydrogen Hub has launched in Oxfordshire at the Said Business School, to drive investment in hydrogen and fuel cell projects in the county.

As Oxford looks to introduce the UK’s first zero emission zone in 2020, hydrogen and fuel cell technologies will have an important role to play in enabling the city to deliver on this ambitious plan to improve air quality in the city centre as well as decarbonising energy across the county.

Hydrogen Hub’s chairman, Kevin Fothergill said: “The Hydrogen Hub has been very successful in Swindon and Wiltshire, developing and deploying hydrogen and fuel cell projects which have established the region as a leader in these clean energy technologies.

“We are really excited about the launch of the Oxfordshire Hydrogen Hub and we look forward to working with Oxfordshire local authorities, the Government and local businesses to help them achieve an innovative and ambitious plan to improve local air quality and decarbonise energy for the benefit of the local environment and economy.”

Hydrogen Hubs are a new initiative that aim to bring together local stakeholders and the hydrogen and fuel cell industry to develop projects that will deploy technology in a way which meets the local energy needs of the community.

More than 100 stakeholders from local businesses, low carbon initiatives, the local authorities and the hydrogen and fuel cell industry attended the launch event, giving local businesses and stakeholders the opportunity to learn about the different technologies and how they might be applied in different scenarios to deliver clean, cost effective energy.

Two hydrogen vehicles, a Toyota Mirai and Hyundai ix35 fuel cell were displayed in front of the venue.

James Clark, Toyota press relations manager, said: “The success of vehicles such as Mirai requires the establishment of a wide and robust hydrogen infrastructure, giving people access to hydrogen fuel when and where they need it. This makes initiatives such as the Oxfordshire Hydrogen Hub invaluable in bringing stakeholders together to set out a vision for what can be achieved and to help build the engagement and investment to make it happen.”

The Hydrogen Hub launched in Swindon and Wiltshire in January 2016 and has since driven over £1.5 million of external investment in hydrogen and fuel cell projects in the region with more 50 different organisations participating in working groups and projects.

Hydrogen powered cars will have much stronger residuals than combustion or electric models.