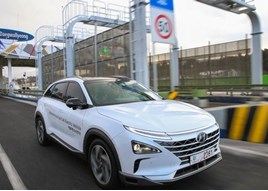 A fleet of Hyundai cars have become the first hydrogen fuel cell vehicles to achieve level 4 autonomous driving by completing a self-driven 118-mile journey from Seoul to Pyeongchang.

Until now, autonomous driving has been demonstrated only on selected sections of Korean domestic roads and at a limited speed: this is the first time autonomous vehicles have operated on public highways at 110 km/h, the maximum speed allowed by law on Korean highways.

Three Hyundai vehicles completed the journey, all based on Nexo, Hyundai’s next-generation fuel cell electric vehicle which is scheduled to be released in Korea next month. All vehicles were equipped with level 4 self-driving technology, as defined by the SAE international standards and equipped with 5G network technology.

The cars feature a number of technologies that enable them to recognise surrounding vehicles more accurately and make better judgements at junctions and navigate through toll gates by accurately calculating the toll gate’s width and position.

The vehicles are also able to pinpoint their position on a map by using external sensors fitted for situations when the GPS signal was interrupted, such as going through underground tunnels.

Jinwoo Lee, head of the Intelligent Safety Technology Centre at Hyundai Motor Group, said: “Hyundai’s philosophy for developing autonomous driving technology is to provide the highest level of safety combined with a high standard of convenience that our customers expect."

Hyundai Motor Group is preparing for the commercialisation of the SAE standard Level 4 compliant autonomous-driving system in smart cities by 2021.

Hyundai plans to commercialise the technology for fully autonomous driving by 2030.

Level 4 is equivalent to high automation and the car can operate without human input or oversight but only under select conditions defined by factors such as road type or geographic area.