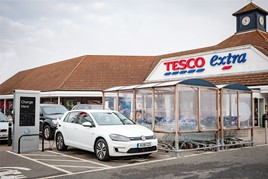 Volkswagen and Tesco will develop what they claim will be by the UK’s largest retail electric vehicle (EV) charging network, powered by Pod Point.

They will roll out more than 2,400 EV charging bays across 600 Tesco stores within the next three years.

Customers will be able to charge their electric cars using a standard 7kW fast charger for free, or benefit from the use of a rapid 50 kW charger for a small cost in line with the market rate.

Tesco wants to offer customers and local communities an alternative to fossil fuels, and also play its part in supporting the transition to a low-carbon, clean air UK. It also builds on its commitment to 100% renewable electricity made in May 2017.

Meanwhile, Volkswagen wants to sell one million electric cars a year worldwide by 2025.

Geraldine Ingham, head of marketing at Volkswagen UK, said: “This incredibly exciting partnership with Tesco, powered by Pod Point, underlines the scale and ambition of our electric car programme in the UK.

“Working with these partners to provide such an extensive network of EV chargers should leave no one in any doubt about the Volkswagen brand’s wholehearted commitment to an electric future.”

Jason Tarry, Tesco CEO UK & ROI, added: “As the UK’s biggest fuel retailer, we have a role to play in supporting the transition to a low carbon future and improving air quality.

“We know our customers are increasingly moving towards electric vehicles, offering charging while they shop is another little help to make their lives easier.”

The deal represents a 14% increase in the number of public charge bays in the UK, which Erik Fairbairn, CEO of Pod Point, described as a “monumental day for electric vehicle drivers”.

“It is a massive leap forward for the UK and a significant step in our mission to put a Pod Point everywhere you park,” he said.

The RAC welcomed the improvement in infrastructure. RAC spokesman Rod Dennis said: “For more than a year we have been calling for charging infrastructure in places where drivers are likely to spend extended periods of time, such as supermarkets and public car parks, so we applaud all the parties involved in agreeing this deal.”

Dennis also believe it will go some way towards reducing range anxiety, where drivers are concerned they will run out of charge before completing a journey.

“The fact that a choice of charging speeds will be offered at Tesco sites will also likely suit the needs of a lot of electric and plug-in hybrid car drivers, ” he continued. “It will mean they can receive a welcome boost of electric charge for minimum fuss while they do their regular shop, with some benefiting from completely free charging.

“Strong and easy-to-use charging infrastructure, alongside the development of battery technology and lower upfront costs, is vital in accelerating the take-up of electric vehicles.”

Bill to standardise electric vehicle charging welcomed by the AA

Bill to standardise electric vehicle charging welcomed by the AA

Fleets say electric vehicles will become “dominant” in next 10 years

Fleets say electric vehicles will become “dominant” in next 10 years