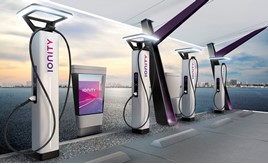 Ionity, the European electric vehicle charging network, will open its first UK station next month on the M20 near Maidstone, marking the first step of a planned network of 50 over the next 18 months.

A joint venture between BMW, Daimler, Ford and Volkswagen Group, Ionity has 71 sites in 10 countries and has ambitious plans to get to 400 sites by the end of 2020.

Paul Enwistle, Ionity spokesperson, said each charger would offer 350kWh, capable of charging an electric vehicle in just 15 minutes if it can accept the capacity, or 25-30 minutes if it can only accommodate a lower capacity.

One average, each station will have six chargers. They will be position on motorways and major roads, forming one-third of Ford’s EV charging strategy.

Enwistle said: “We will open our second site in Gretna (A74M) and our third and fourth sites are likely to be Thurrock (M25, Essex) and Milton Keynes (M1).”

In addition to the Ionity motorway-based network, Ford will offer EV customers a mobile app that gives the access to a European network of more than 100,000 chargers. It is also designing its own smart wallbox chargers for domestic use.

Ford’s Mark McMahon said: “From a customer point of view, with an ICE (internal combustion engine) vehicle you don’t think about fuel. We want it to be the same for EV customers.”

The app and the wallbox data will link into the Transportation Mobility Cloud to provide customers with information about when best to charge their cars based on up-coming journeys.

“There will be more interaction so FordPass (Ford’s connected app) can link it to be an encompassing ecosystem,” McMahon said. “Where someone is using a lot of energy, this will teach and help them to be more economical if that’s what they want to achieve.”

One third of councils that responded to an electric vehicle (EV) infrastructure survey say that they have no plans to increase charge points.

Morrisons will become the latest supermarket chain to promote the adoption of electric vehicles (EVs) with a charge point specialist set to drive the installation of infrastructure at its UK stores.

Leasing company Arval is to open an electric vehicle charging site at its Swindon head office for use by its employees and other businesses in the same building.