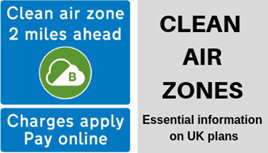 Fleets operating within Bristol may be forced to change their vehicles if the city’s Clean Air Zone (CAZ) proposals are introduced.

ALD Automotive, in conjunction with the University of the West of England (UWE), has conducted a study into how Bristol’s Clean Air Zone proposals could affect fleet vehicles.

The research concludes that the combined financial and administrative impact could become too great for companies to withstand, forcing them to adopt cleaner vehicles.

Matt Dale, head of consultancy for ALD, said:  “Government and local authorities must accept that we need time to act, and we need the information to act upon.  Fleets will not be able to change their vehicles overnight, and will need confirmed details in order to make informed decisions.”

The ALD study found that the potential cost to a typical fleet of 30 cars could be more than £30,000.  The study also looked at ten months’ worth of data, from vehicles fitted with ALD telematics, to understand the movement of vehicles in Bristol and the surrounding area.  It found that, depending on the position of the Bristol CAZ boundary, almost half (49%) of all vehicles entering the zone were non-compliant and would therefore potentially attract a charge.  For vans (LCVs) the figure was over 80%.

“The findings of our study have huge implications for everyone,” added Dale, “not only for the financial impact but the administrative burden too.  Employers wishing to minimise the impact will also nee to consider the HR implications of forcing drivers to change their vehicles.”

It is not just business trips that will be affected.  Commuters could also be hit, particularly as just 6% of all the UK’s cars are compliant under the CAZ plans.  For some commuters, the impact could be double, as Matt explains:  “With neighbouring cities around the country considering introducing CAZs, commuters living in one zone, for example Bath, and commuting into another such as Bristol, will attract two daily charges.”

The full ALD study, including advice for fleets, is available here: https://www.aldautomotive.co.uk/caz

Clean air zones and the road to zero emissions

Fleets will get an overview of the latest plans for clean air zones (CAZs) across the UK with a presentation and discussion session by UK100 at Fleet Live.