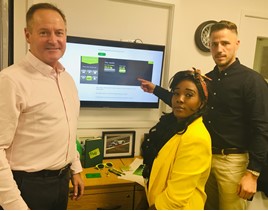 This new initiative coincides with the company gaining BP Carbon Neutral Certification for a second year.

The two-hour surgeries are held quarterly at the business’s Chesterfield HQ. Staff receive information on how BP Target Neutral allows them to measure and offset carbon emissions produced by their car, flight, bus and rail journeys. This is achieved by buying carbon credits used to fund carbon reduction projects across the globe, including forest protection in Zambia, cook stove distribution in Mexico and hydropower development in China.

Employees are guided step-by-step through the simple offsetting process online and receive BP certification once completed.

“We believe we have a responsibility to set an example and are keen to guide employees through offsetting their own carbon footprints using BP Target Neutral’s online calculator. Not only do offset projects reduce emissions but they also deliver social benefits aligned to the UN sustainable development goals.”

BP Target Neutral has offset more than four million tonnes of carbon in the last 12 years on behalf of individuals and companies. BP estimates that the impact of this is equivalent to taking around two million cars off UK roads for a year.

Shell has launched a carbon offsetting scheme allowing fleets to offset the CO2 emissions from their fuel purchases.

The Government says there is a need to go “further and faster” to reduce transport emissions to reach its net zero emissions target by 2050.