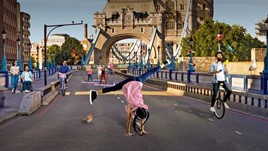 Levels of air pollution from traffic and other sources plummeted when countries imposed pandemic lockdown measures. Post lockdown, pollution has already started ramping back up in China, compounded by unusually high levels of commuter traffic.

In a major international survey of public opinion in six European countries, just under two out of every three people (64%) on average said they do not want to go back to pre-Covid pollution levels.

Roughly the same proportion (68%) agreed that cities must take effective measures to protect citizens from air pollution, even if it means preventing polluting cars from entering city centres to protect clean air, with as many as 63% of drivers themselves in support.

Around three quarters (74%) of respondents said cities must take effective measures to protect citizens from air pollution, even if this requires reallocating public space to walking, cycling and public transport, with just 10% opposed.

Even though there is reluctance to use public transport due to the potential risk of contagion, regular users of buses and trains said hygiene is a deal-breaker. Four in five people (81%) who primarily used public transport before the pandemic are willing to return: 54% said they will start riding buses, trams and trains again if sufficient hygiene measures are taken to prevent Covid-19 contagion; the remaining 27% are set to return regardless of risk.

Sascha Marschang, acting secretary general of the European Public Health Alliance (EPHA), said: “People have taken a deep breath of clean air and decided to keep it. Now the invisible killer is visible: air pollution made us sick, worsened the pandemic and hit the most deprived the hardest. Reducing health inequalities by designing a pollution-free city transport system cannot wait any longer.”

City transport systems are being re-imagined for life after lockdown.

Pavements are being widened, pop-up bike lanes created and some roads are being closed to cars and vans altogether.

Social distancing has drastically reduced the capacity of public transport and people are being urged to walk or cycle instead.

He has announced a £2 billion package to encourage the much-needed modal shift in transport as people return to work.

Shapps says that over the next few months, the Government will set out further measures to make a “once in a generation’” change to the way people travel in Britain.

Other cities in Europe have been quick to adapt transport systems during the pandemic. Berlin has new ‘pop-up bike lanes’, while greater Paris is investing €300 million in a cycling network. Krakow is upgrading its cycling infrastructure and widening pavements, while Brussels is deprioritising cars in its city centre and adding 40km of bike lanes. Dublin is removing car parking to boost cycling safety and physical distancing.

Late last month the European Commission unveiled a €1.85 trillion recovery plan to reboot the bloc’s economy baldly hit by the pandemic. The proposal includes a 25% climate spending target. It stresses the need to prioritise investments in sustainable vehicles, charging stations and cycling.