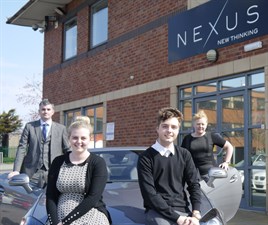 Nexus Vehicle Rental has been recognised for its commitment to career progression in one of the professional service industry’s most prestigious award programmes.

Nexus received the ‘Employer of The Year’ accolade in the BPP Professional Education Apprentice of The Year Awards, a highly sought after recognition within the business, finance and law sectors for encouraging career progression.

The judges felt Nexus was a deserving winner of the award as its apprentices have a significant impact on the business as a result of its integrated ‘Nexus Career Path’.

The scheme, which follows on from the 12-month apprenticeship programme, encourages employees to broaden their skillset by working across different departments.

Currently Nexus has 37 members of staff on the career path, with 80% of its apprentices going into full time employment on completion.

Carl Lygo, vice chancellor and chief executive officer at The BPP University, said: “Nexus is an impressive caring organisation with a well-developed career path for apprentices.

“We were very impressed that apprentices had a choice of working in a range of departments, encouraged applications from all diverse ranges and supported the local communities within which Nexus operates.

“The judges felt this was a great model of success for the modern professional apprenticeship programme.”

Gayle Howarth, operations development manager at Nexus, added: “We are delighted to have received this recognition for our apprenticeship scheme.

“At Nexus we concentrate on giving apprentices the opportunity to identify and develop their strengths and where we are able to, open doors to suitable positions within the business. This award highlights our commitment to working with young people and also developing the skillset of our current employees.”

David Brennan, CEO at Nexus continued: “Our apprentices are a real asset to us and they add a valuable balance to the business. This award is well deserved by both our operations team and the apprentices themselves.”