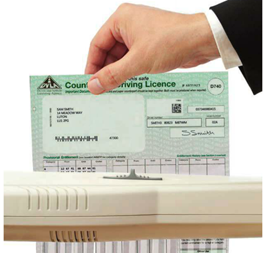 A new electronic licence-checking service is finally available for testing, just days before the paper counterpart is abolished.

However, several concerns have been raised over the Share Driving Licence (SDL) service in the wake of its launch.

Maycock, who is also chairman of the Association for Driving Licence Verification (ADLV), believes fleets will be tempted to just use the PDF printout provided by the new service to check a driver’s entitlement to drive, rather than checking it against their on-screen details. “That’s a real concern,” he said.

“People will typically look to cut corners, but by not using the service properly it could result in some employers being provided with information that’s been changed.

“It’s vitally important that they check the printout against the online details that they are given permission to view via the access code.”

The Driver Vehicle Licence Agency (DVLA) had told Fleet News that "all" employers would be given access to SDL a full month before the legislation is changed on June 8.

DVLA programme manager Dudley Ashford said he wanted to “provide the opportunity for users to be well-versed” in the new service and understand how it was going to “impact their day-to-day operations”.

He also suggested that the trial period would allow employers the opportunity to provide feedback on how the DVLA could enhance the service to make it an easier transition. Post-launch feedback will now be taken into account and could still lead to adjustments to the service.

However, SDL was only opened up to all employers last week, giving fleets less time to assess its use and suitability to help them fulfil their duty of care obligations.

Two separate online licence checking services have been developed by the DVLA: View Driving Licence (VDL) and the SDL service.

VDL is intended for drivers to check their own records only, and is not intended to be used by third parties.

The DVLA says it is conducting development work with a view to integrating VDL with Gov.UK Verify, which is designed to ensure the safe use of government services, with an option to access via an individual’s national insurance number.

SDL enables employers to access employees’ driving records, subject to the latter giving permission. To share their licence details, drivers will access the VDL service and generate a one-time use unique code that is valid for up to 72 hours – the driver can then share the code with their employer.

The employer can then input the code and the last eight digits of an employee’s driving licence number to the SDL page to view a driver’s licence status, endorsements and the vehicles they are eligible to drive (see panel below).

The DVLA believes the new service, which it says will be "initially" free to fleets, will improve risk management by giving employers access to real-time driving licence data.

But Richard Brown, managing director of Licence Check, says fleets are also confused about the way they can check employees’ driving licences.

The DVLA has repeatedly stated that the VDL service is for driver use only – as opposed to the SDL service which should be used by employers – and that any use of the service by third parties, including an employer, is an offence under the Data Protection Act.

It has said it will investigate and pursue any case where unauthorised access has occurred.

However, Brown said: “Numerous instances have been reported to the DVLA where driving licence records are being accessed without the informed consent of the data-subject.”

The ADLV is collating evidence of behalf of its members for submission to the DVLA allegedly showing misuse of the VDL service.

A DVLA spokesman said: “It is an offence under the Data Protection Act for a third party to unlawfully access or procure access to an individual’s personal data or to access personal data without authorisation.

“Employers must carry out appropriate checks on employees under their own statutory obligations and in accordance with their own corporate policies.

“It is therefore strongly advised that employers adhere to the access guidelines around VDL and SDL, to be able to fully evidence sufficient and appropriate checks have been carried out in the event of audit.”

Meanwhile, the FTA has suggested that the DVLA’s service for employers “won’t deliver the goods”.

FTA chief executive David Wells has written to DVLA chief executive Oliver Morley explaining that the organisation, which represents light and heavy commercial vehicle operators, “is not convinced that the proposed online checking system will be robust enough to cope with industry demands”.

He has also written to the Department for Transport, the Traffic Commissioners and the Driver and Vehicle Standards Agency (DVSA) requesting that they do not “enforce the licence check requirement until such time as the Government provides a suitable means of doing so”.

According to FTA research, 94% of its members rely on a physical check of the paper counterpart, either separately or as part of a process which involved either telephone or external checking. A Fleet News poll suggested 46% of fleets relied on the counterpart.

Of the 24 companies questioned by the FTA, the number of checks amounted to 399,683 over a 12-month cycle. Feedback confirmed that the main reason for manual checking was cost. The FTA says it is concerned that that the information provided through the new service by the driver on the PDF only contains details which are normally held on the counterpart. This means that the photocard licence still requires checking separately, says the FTA.

The FTA suggests that driver licence entitlement should also be on the PDF and has complained that the window of 72 hours, whereby the access code is valid, is not long enough and should be extended up to 14 days.

It is also concerned about non-UK licence holders which will have to be checked through via a premium rate telephone service of 51p per minute during DVLA office hours. The DVLA wouldn’t be drawn on specifics, simply saying instead that it would “continue to work closely” with the FTA as it moves towards June 8.

Similar in principle to the paper counterpart, the online alternative – Share Driving Licence – places the driving licence holder in control of their information and who they share it with.

The first part of the process requires the driving licence holder to generate a unique, one-time use access code for their record. This is achieved by the driver logging on to the View Driving Licence service.

The driving licence holder may then share the access code, which is valid for 72 hours, plus the last eight digits of their driving licence number, to anyone who has a right to see it.

The second part of the process will enable the third party to enter the access code and last eight digits of the driving licence number via the Share Driving Licence page on the Government website gov.uk. This will allow the third party to see the driver’s licence status, endorsements and what vehicles they can drive.

The view of the driving licence presented back to the third party will be date-and time-stamped, and downloadable in the form of a PDF. The information will be accurate at the time of download and is a snapshot of the record at that time.

Drivers will also have the option of downloading a PDF summary of their driving licence information that will have the unique one-time access code printed on it.

In the event of a driver receiving any endorsements, courts will update driver records within 24 hours.