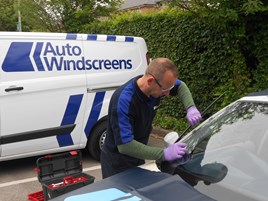 Four years after going bust, Auto Windscreens has risen from obscurity to become one of the UK’s top operators again.

When the glass repair and replacement company ran out of cash in 2011, the liquidators were called in and more than 1,000 staff were made redundant.

At the time Britain’s second biggest operator, it was broken-up and its prize assets sold off to the highest bidder.

Trifords, part of the Markerstudy Group, acquired the brand name and the company’s Chesterfield headquarters.

It set about rebuilding the business, and its reputation securing a series of high-profile contract wins, with Ogilvie Fleet, TCH Leasing and Hertz.

The remarkable recovery was underlined by the acquisition of AA AutoWindshields, for an undisclosed sum, earlier this month.

These have included a dedicated call handling and dispatch team, increasing the number of glass repairs instead of replacement and introducing an online information portal enabling fleet managers to access in real-time work being undertaken.

Further fleet-focused products and initiatives are promised by Thornton, who declared: “This marks the beginning of a new and exciting chapter for Auto Windscreens.”

The business has recently moved to a wholly mobile service, as has the UK’s largest operator Autoglass.

Auto Windscreens was delivering services through 33 branches and 260 mobile technicians, before it closed its network and instead introduced 85 service support points, where glass can be stored.

The acquisition of a similarly fully mobile AA AutoWindshields, which completed around 100,000 jobs last year compared to Auto Windscreens’ 250,000, adds another 120 mobile technicians, as well as 80 other employees and 45 service support points.

Thornton is now focused on integrating the two organisations into a single business.

Employing around 700 people in total, he said there are likely to be a “relatively small number of redundancies” – less than 5% – as duplication of back-office jobs is removed.

Closure of some service points is also likely, although Thornton said that, once a review of locations had been completed, there would still be “well north of 100”.

“Auto Windscreens will be a bigger and stronger business after restructuring,” said Thornton. “We are targeting significant organic growth through focusing on what we do best: expert glass repair and replacement.”

The problem for AA AutoWindshields was size: it was a mid-size business in a highly competitive market.

When The AA acquired Preston-based AutoWindshields, in December 2009, it had ambitious plans to turn it into one of the UK’s leading glass repair and replacement services.

The fleet was expanded and more mobile technicians were hired, but an AA spokesman said: “To achieve a competitive scale and take on the leading operators, it would need significant and long-term investment in technology and marketing, as well as acquisition of other businesses. The numbers simply didn’t stack up.

“As a top three player Auto Windscreens offers that degree of investment and scale, with a strong focus on customer service.

“It reflects the AA’s customer ethos and thus offers the best solution for both growth of the business and for customers.”

Thornton, who joined Auto Windscreens as MD in March, 2014, agrees. “There are clear synergies for the two businesses,” he said.