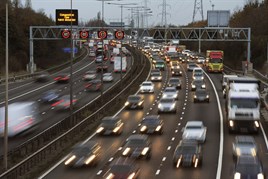 Highways England has been ordered by ministers to limit roadworks to two miles, according to The Times.

The newspaper says the move is intended to reduce the impact of works, which, in certain cases, stretch from ten to 20 miles.

Malcolm Bingham, FTA’s head of road network management policy said: “Long stretches of roadworks create a series of problems for our members – it’s an issue that they constantly complain about.

“We know that for the largest vehicles it costs £1 for every minute they’re stuck in traffic. Limiting roadworks to two-mile stretches could considerably reduce the time they’re delayed.  Nose-to-tail shunts are more prevalent in queues of slow moving traffic too, so hopefully this will also cut the number of accidents in roadworks.”

Disruption on England’s motorways is expected to increase as the Government’s £15.2 billion plan to improve the strategic road network gets underway. More than three-quarters of England’s motorways and major A-roads will be resurfaced and more than 1,300 miles of road will be built by 2020.

Currently the longest stretch of motorway roadworks runs for more than 18 miles between junctions 28 and 31 of the M1 near Chesterfield.

Bingham said: “Anything that keeps traffic flowing and reduces delays is welcome – time is money for all transport operators.”

Highways England told The Times: "We are committed to minimising disruption from road works even further and are exploring managing work in different ways while ensuring good value for money for the public."