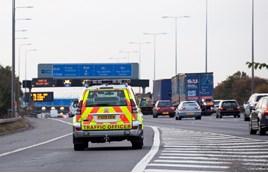 A wardrobe dropped on the M62 was among the wide range of incidents that traffic officers responded to over the festive season on England’s motorways.

Statistics released by Highways England show that its officers dealt with 4,281 incidents between Christmas Eve and New Year’s Day to provide help to drivers – an average of one every three minutes.

Incidents attended by traffic officers included a wardrobe falling from a car on the M62 near Leeds on Christmas Eve, a large pothole caused by flooding on the M62 near Rochdale on Boxing Day, and a lorry fire on the M1 near Newport Pagnell on New Year’s Eve.

There were also 78 abandoned vehicles, 55 flooding issues and 21 fires.

The south east was the busiest region with 1,094 incidents compared to 324 in the east Midlands, making it the quietest region over the nine days.

Melanie Clarke, director of customer operations at Highways England, said: “Around 40% of the incidents we dealt with were caused by vehicles breaking down so it shows how important it is that people make sure their vehicles are in a good condition and have enough fuel before setting off.

“We’d also encourage drivers to check their journeys before heading out to find out about any ongoing incidents and plan an alternative route if they need to.”

Highways England’s traffic officers manage incidents by working with the emergency services, managing traffic to reduce congestion, clearing debris from the carriageways, and re-opening routes as soon as it is safe to do so.