Ford to launch seven new or refreshed vehicles in 2016 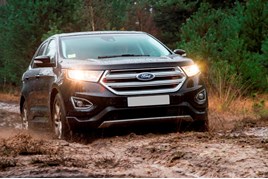 Ford is due to launch seven new or freshened vehicles in 2016 as part of the manufacturer's plan to build a vibrant and sustainably profitable business.

As well as new vehicles, the manufacturer's strategy includes brand and efficiency initiatives to deliver improved profits in 2016 and a 6-8% operating margin for Ford of Europe in the longer term.

“In the past three years, Ford of Europe has improved its business in all areas and moved from deep losses to a $259 million profit in 2015. This is a good first step,” said Jim Farley, Ford executive vice president, Europe, Middle East and Africa.

“We are absolutely committed to accelerating our transformation, taking the necessary actions to create a vibrant business that’s solidly profitable in both good times and down cycles.”

Ford has initiated a voluntary separation programme in Europe supporting a significant reduction in administrative and selling costs to reach industry benchmark levels of efficiency.

With the move, Ford of Europe expects to save about $200 million a year on an ongoing basis.

"We are creating a far more lean and efficient business that can deliver healthy returns and earn future investment,” Farley said.

“Our job is to make our vehicles as efficiently as possible, spending every dollar in a way that serves customers’ needs and desires, and creating a truly sustainable, customer-focused business.”

After launching more than 30 new and refreshed vehicles since late 2012, and increasing market share in each of the past two years and boosting sales 10% in 2015, Ford of Europe will continue to strengthen its vehicle line with plans to:

As an initial step in January, Ford unveiled FordPass – a platform that reimagines the relationship between automaker and consumer.

FordPass members can talk to a personal mobility assistant to help with travel arrangements, reserve and pay for advance parking, earn loyalty points, schedule service and much more. FordPass launches in Europe later this year.

FordPass also includes the opening of FordHubs, where consumers will be able to explore Ford’s latest innovations, learn about its mobility services, and experience exclusive events, with the first FordHub in Europe opening in London this year.

“We are investing in Ford Smart Mobility, which will deepen our customer relationships and reduce our conquest marketing costs,” said Roelant de Waard, vice-president, marketing, sales and service, Ford of Europe.

“There is a huge opportunity in Europe to give our customers what they want, sometimes before they even know it, by anticipating their needs through data and data analytics.”