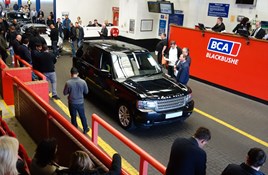 Performance against CAP improved from 95.64% to 98.03%, while retained value against original MRP (manufacturers' retail price) improved slightly at 40.48%, with age and mileage broadly static.

Compared to January 2015, average fleet and lease values were down slightly by £38 (0.4%), with performance against CAP Clean improving although retained value was nearly a percentage point down on 2015.

Performance against CAP was up by a quarter of a percentage point compared to 2015.

Simon Henstock, chief operating officer BCA UK  Remarketing commented “January saw a well-balanced marketplace in terms of supply and demand, with plenty of appetite for used cars across the board.

"However, average prices dropped slightly compared to the back end of 2015 and while there is a lot of demand for good retail quality stock, there are challenges at the extremities of the market.”

He added: “The relatively mild weather has also meant that the seasonally strong performance for the 4x4 sector hasn’t really reached expectations.

"With Easter arriving early, we may see values reduce more quickly than usual once we move into the second quarter and the holiday season hits.”