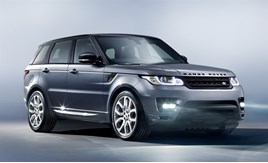 According to the latest figures from Tracker, the Range Rover Sport was the most stolen and recovered vehicle in 2015.

Year-on-year Tracker saw a 12% increase in the number of stolen vehicles recovered in 2015, equating to nearly £12.5 million worth of vehicles being returned to their owners.

Three Range Rover models now appear in the ‘Top 10 Most Stolen and Recovered’ table – the Sport, Vogue and Autobiography – demonstrating the popularity of the brand with thieves. The Audi Q7 also makes its first appearance, coming in 10th.  The BMW 3 and 5 series make a re-appearance after a number of year’s absence, last listed in 2013 and 2009 respectively.  The Mercedes Benz C63 climbs six places to number four, having entered the top 10 last year.

“Our latest figures reveal a shift in the most desirable makes and models that thieves are stealing to order, with 4x4s dominating our top ten,” explained Andy Barrs, Head of Police Liaison.

“Whilst it’s common for car thieves to target premium marques, we should not underestimate the massive appetite for Ford, Vauxhall, and VW models which are stolen in even greater numbers. A Home Office Report published in January this year points to significant challenges with manufacturer security systems and suggests that fitting a tracking device could be the best solution.”

“We believe this is down to the growth in keyless car entry and ignitions systems that are prone to hacking; where criminals target these vehicles by bypassing their security systems, using technology they’ve bought on the internet.  By working hand in hand with the UK’s police forces, we were able to assist with 65 arrests in 2015, resulting in some of these criminals being taken off our streets.”

Barrs added: “We remain committed to continuing to assist police forces across the UK and protecting car owners, by helping to recover many more stolen vehicles and assets in 2016.”