450 miles of road works to be removed for Easter holiday 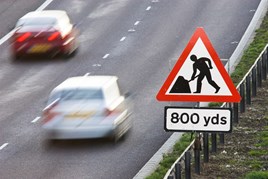 More than 450 miles of road works are to be completed or removed in England by Thursday, in time for the Easter break.

Highways England aims to complete or lift 208 sets of roadworks by 6am on Thursday 24 March – leaving more than 97% of its 9,534-mile network free of roadworks in time for the holidays.

The government is investing £15billion to deliver the biggest upgrade to motorways and major A-roads in a generation.

Building new roads and creating smart motorways that keep traffic moving even in the busiest periods will cut congestion – and Highways England is taking action to reduce delays over the bank holiday break.

Roads minister Andrew Jones said: "We want to deliver fast and reliable journey times for drivers over the bank holiday weekend so I am pleased hundreds of miles of cones are being lifted.

"This is good news for millions of families and hardworking people who will be travelling and taking advantage of the four-day break.

"We are delivering £15billion of upgrades to our roads to make our highways fit for the future – but motorists should not needlessly be held up."

Highways England director of customer operations, Mel Clarke, added: "This Easter, we’re helping drivers with their journeys by clearing roadworks across the majority of motorways and major A-roads in England.

We’ve worked closely with other transport providers to ensure our network can cope with increased demand, and we’re pleased to say that 97.2 per cent of our roads will be free of work to help Easter road trips go smoothly.

"By suspending or completing roadworks, more lanes will be open and many of the associated speed restrictions will be lifted.

"Of course, we still advise drivers to plan their journeys and check the latest traffic and travel updates as well as ensuring they have enough fuel before setting out.

"We’d also remind those with caravans and trailers to check their vehicles before they take to the roads for the first time this year - especially their tyres, to ensure they are not worn or damaged, to help avoid a potential breakdown or incident and help keep traffic flowing."

Highways England will complete 257 miles of roadworks at 133 locations before the Easter holiday. A further 75 sets of roadworks and lane restrictions will be suspended across 219 miles of carriageway by 6am on Thursday 24 March, until just after midnight on Tuesday 29 March.

For the safety of drivers and their passengers, lane restrictions or temporary speed limits will need to remain at major schemes with large excavation areas or major structural projects which require on-going traffic management for safety.