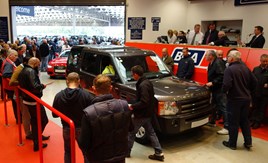 The latest BCA Pulse report shows that both fleet and lease and part-exchange values rose in March, with both sectors recording value growth over the year.

Nearly-new values fell, although model mix has a significant role to play in this low volume sector.

Despite this, the headline average value of a used car fell in March as a result of changing volume mix.  Compared to February, the headline value fell by £91 (1.1%) to £7,838. This reflected a change in the volume mix over the month, as dealers sold greater numbers of part-exchange vehicles following on from the new registration plate on March 1.  Year-on-year, however, the headline figure was up by £314, equivalent to a 4.1% rise.

He added: “The plate change period inevitably sees volumes rise substantially in the wholesale markets and stock levels traditionally remain high until at least early May.

“Any uplift in volume has the potential to change the balance in supply and demand and can impact on values as buyers simply have more choice.

“As volumes increase, we are advising sellers to pay attention to the basics of remarketing.  Presentation and preparation are a given, and it is vital to properly identify and declare the specification, particularly if there are a lot of base-spec models about.

“Providing the service history at the point of sale is also important and can have a real, tangible effect on the potential prices vehicles might achieve.”

Fleet & lease car values averaged £9,741 at BCA in March, an increase of £79 (0.8%) compared to February’s figure of £9,662.  Retained value against original MRP (Manufacturers Retail Price) improved to 42.2%, with age and mileage broadly static.  Compared to March 2015, average fleet & lease values were up by £71, with retained value marginally down.