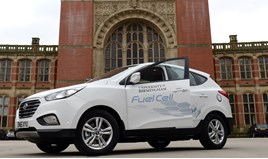 The University of Birmingham has taken delivery of one of the UK’s first hydrogen fuel cell fleet vehicles, a Hyundai ix35.

Hydrogen fuel cell vehicles are already being trialled in the UK but the University of Birmingham is believed to be the first in the country to employ the technology as part of its day-to-day fleet operations.

Stuart Richards, director of hospitality and accommodation services at the University, said: “We are in a unique position here on our main campus in Edgbaston, with our own hydrogen refuelling station making it possible to employ new technologies such as the hydrogen fuel cell cars in our day-to-day activities. The use of this car as part of our regular fleet is a tangible example of how scientific research can be turned into reality.”

The new vehicle, leased from Lex Autolease, will be used for staff transport and as part of the University’s chauffeur service for visitors.  The onsite hydrogen fuelling station, unveiled in 2008 to support work carried out at the University’s Centre for Fuel Cell and Hydrogen Research, will provide the power for the new vehicle.

Chris Chandler, principal consultant at Lex Autolease, said: “Hydrogen fuel cell technology is very much in its infancy in the UK, with just a few vehicles of its kind in the country.”

Hyundai has been developing fuel cell electric vehicle technology since 1998.

Mass production of the ix35 Fuel Cell started in 2013 and since 2014, the company has delivered vehicles to a number of customers across both the private and public sectors.