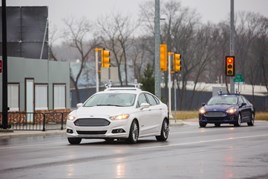 Smart Witness is calling for video recording technology to be standard in autonomous vehicles, so insurance claims can be correctly attributed after an accident.

Nine out of ten drivers polled in a survey by the company (91%) support the compulsory introduction of camera technology in all autonomous vehicles so there would be court admissible proof of exactly what had happened in the event of an accident.

SmartWitness chief executive Paul Singh said: "Around 40% of all motor insurance claims are disputed, but how do you resolve a dispute when you can only hear evidence from one of the drivers involved?

"The simplest way to eliminate the problem is to make camera technology compulsory in all autonomous vehicles. This will provide court admissible proof in the event of an accident and help to alleviate motorists' fears about the introduction of driverless cars.

"It is fantastic that the Government is embracing this new technology and powering forward, but proper safeguards need to be put in place to protect all motorists."

The SmartWitness poll, which surveyed 1000 people, found that 52% of motorists oppose the introduction of driverless cars

Dashboard cameras are now used in more than half of Britain's fleets, according to the Road Haulage Association.

Increasing numbers of private motorists are also using them to guard against 'cash for crash' fraudsters and reduce insurance premiums.

Transport Secretary Patrick McLoughlin said that driverless cars 'might seem like something of science fiction, but the economic potential of the new technology is huge and I am determined the UK gets maximum benefit.'