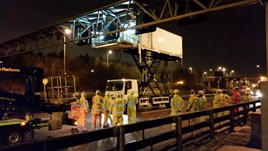 A new maintenance assistance vehicle (MAV) is set to speed up the time it takes to replace overhead signs on motorways and save the taxpayer up to £4 million a year, according to Highways England.

The vehicle is based on the design of an aircraft catering vehicle, which loads refreshments into aeroplanes using a hydraulic scissor lift.

Road workers will also be able to shut fewer lanes using the new MAV, which has been successfully trialled on the roads.

Traditionally, signs are taken down and installed using a flat-bed truck, crane and cherry picker, taking up to 40 minutes. However the MAV can do this in around 20 to 25 minutes by using a small jib crane which is part of the vehicle.

Highways England is currently examining the best way for its contractors to purchase the machines. It is estimated that if the device was widely adopted it could save up to £4 million a year.

Consideration is also being given as to whether it could be used to improve safety for other duties on England’s motorways and major A roads.

Jeremy Bird, head of Health & Safety for Highways England, said: “Safety is our top priority and we believe no one should be harmed when travelling or working on our network.

“Technology has an important role in improving road worker and road user safety and this concept provides an opportunity to not only do this but at the same time reduce disruption on our roads by completing gantry maintenance in less time, and reducing the number of lanes closed to carry out such a task.”

Once the platform is raised to a sufficient height, the jib crane carefully attaches to the sign on the gantry and lifts it off.  The operatives then detach the sign, place it onto a trolley on the platform, and wheel it into the main compartment of the vehicle. The procedure is reversed when installing a new electronic sign.

The hydraulically powered scissor lift enables the signs, which are often found on smart motorway gantries, to be serviced at heights of up to 8.5 metres and in wind speeds of up to 47mph. Furthermore, its CCTV cameras, which play a critical safety role, enable the driver to park the vehicle in exactly the correct place below the gantry before any maintenance takes place, and monitors the operatives at the back while they work.

During the initial trials a full carriageway closure was implemented to see how the vehicle performed. However Highways England believes there is scope to explore leaving some lanes open while work takes place - further reducing disruption – while ensuring safety is not compromised.