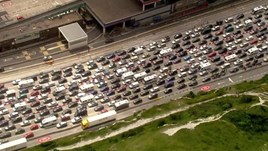 British drivers heading into France face more potential delays over the next two weekends, the AA has warned.

After the Channel port congestion chaos of last weekend, French highway authorities are warning of heavy congestion on main routes throughout the country thanks to the first French ‘Black Saturday’ on July 30, which traditionally brings extremely high traffic volumes. A second ‘Black Saturday’ is also predicted for August 6.

The AA’s European Breakdown Cover service reports an uptake in the number of drivers wishing to take their cars over the channel following the start of the UK school summer break, which could spell long delays for British families caught up with French national holidays.

Rosie Sanderson, of the AA’s international motoring team, said: "We believe the British drivers could to be caught up in congestion on the traditional Autoroute du Soliel via Lyon, as well as routes via Bordeaux to the south-west and through Clermont Ferrand.

“We believe congestion should ease on the Sunday so that might be the best time to travel, if you can. It’s worth considering roads other than the Autoroutes which could avoid congestion and offer a more relaxing, if slower journey.”

Following the recent chaotic scenes at the Channel ports, thanks to increased security checks and understaffing, French customs and security resources have significantly been increased at the UK border.

But Sanderson adds: “Even so, every traveller can expect passport and security checks. That will inevitably take time, so factor delays into your plans.

“Gone are the days when the authorities simply waved drivers through.”