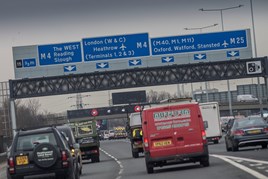 Traffic data provider Inrix has warned that drivers across the UK could face the worst congestion in recent years this bank holiday weekend.

A combination of rail engineering works and a forecast by the Met Office of possible warm weather are expected to cause an increase in the number of vehicles on the road, causing tailbacks stretching miles on some of the worst affected roads.

Combined with station closures at London Bridge, Cannon Street, Charing Cross and Waterloo East for Network Rail’s multi-billion pound Thameslink Programme holidaymakers are likely to shun the likely chaos of public transport in favour of taking to the roads in order to reach their destination.

By comparing data on congestions levels from previous August bank holidays, Inrix has estimated that holidaymakers are likely to begin their journeys as early as Friday morning causing congestion to rise by 7.7% before 1pm ahead of the long weekend. However, with an unprecedented amount of external factors in play, traffic could be up to 20% worse than usual nationally and could be more than double the normal volume in the worst locations.

Following on from the 14 hour traffic jam that plagued the motorways leading to Dover last month, holidaymakers may be wary of attempting to cross the channel into France. However, with uncertainty surrounding the service of the Eurostar with rail worker disputes potentially resulting in strikes over the coming weekend, holidaymakers are left with little choice, with many likely to opt for a ‘staycation’, adding to the pressure on the UK’s already strained road network.

Greg Hallsworth, UK traffic analyst at Inrix, said: “This bank holiday could see the worst congestion in recent years. A perfect storm of conditions will lead to increased traffic as "carmageddon” blights the long weekend. With some uncharacteristically good weather forecast and potential rail disruption, holidaymakers could find roads gridlocked far more than usual. We have already seen delays of up to 90 minutes during the bank holidays earlier this year but we could see delays of more than 120 minutes for some of the worst affected roads this weekend.

For those making their way to far flung parts of the world, tailbacks and delays of up to 90 minutes are expected on the M25 affecting those travelling to Heathrow or Gatwick as well as those looking to connect to the M4 and travel to the west of England. Equally, the M5 leading in to Bristol is likely to see delays of 90 minutes as thousands of holidaymakers head towards the West Country for the three-day weekend.