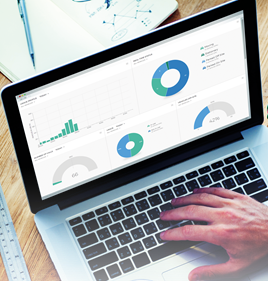 Quartix has launched a new dashboard feature which allows customers greater flexibility over how they view their fleet’s activities in real time.

The Quartix dashboards which are made up of different components can now be tailored to the individual user to display a variety of live fleet information.

The components can be viewed on the live status dashboard. This live dashboard will routinely update to show the current status of all parameters being monitored.

The dashboard is created to best suit your needs, then saved under a customised name to use in the future.  There is no limit to the number of dashboard set-ups per account. These can also be shared with nominated co-workers to facilitate operations and assist with performance monitoring and reports.

The components are as follows:

Some of the components have additional graphics, such as above, that flag the targets for each status and alert in red, just like the graph itself, until those targets are met.  A glance at the screen can tell you how close you are to reaching a particular target, says Quartix.

The five components aim to offer fleets quick and comprehensive views of the most vital functions of a mobile fleet and make staying on top of operations easier than ever.