Be prepared for ‘unprecedented levels of change’ in fleet 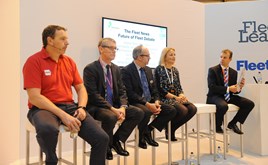 Fleet managers will face unprecedented levels of change in the industry over the next few years, largely driven by technology, alternative fuels and the Government’s approach to company car tax.

That’s the view of ACFO deputy chairman Caroline Sandall, who was speaking at the Future of Fleet debate at Fleet Management Live.

Referring to the Government’s recent consultations on salary sacrifice and the company car tax treatment of ultra-low emission vehicles, she said: “What the Government is talking about doing may or may not come off but I think there is a huge amount of change coming.”

Ashley Sowerby, managing director at Chevin Fleet Solutions, predicted that in 20 years’ time fleet managers will look back on petrol and diesel “as we look back on coal and steam power”.

“In my opinion electric vehicles will win,” he said. “The barriers that currently exist will get replaced and overcome very quickly. There will be a technology change, perhaps away from Lithium-ion. Technologies such as graphene are starting to be used for batteries, and graphene would allow much higher capacity and much faster recharge times and those sorts of things could be complete game-changers.”

Drivers’ fears and concerns need to be overcome before there is widespread adoption, according to Sandall.

“Government will largely dictate that so if it introduces legislation and targets that force industry to react then we might see changes quicker but fully autonomous is 20 to 30-plus years away,” she said.

Sowerby added: “It's critical about where you try to use the technology. If you try to go down a busy high street or past a school that's not the right time but I think there will be a gradual adoption on motorways and highways.”

Car connectivity is increasingly developing and the fleet industry will have to overcome the challenge of data management.

“There are changes in data protection legislation coming in that will create a greater burden on employers to make sure that their employees adequately understand how their data is going to be used and appropriately consent which is going to be quite a big challenge,” Sandall said. “But, equally, that data can drive efficiency, can support the driver, can support the fleet.”

“There is so much data that we would love to have access to from a vehicle, things like fault codes and driver business trips,” he said.

“What it also does is change the market.  It moves the manufacturers into the recurring revenue market. Beyond the supply of the vehicle they have then got an on-going relationship direct with the customer and that in itself will be a game-changer.”