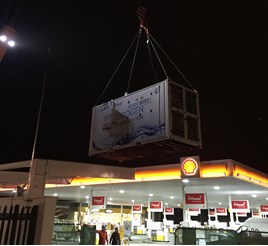 The Shell Filling Station is located at the Extra Motorway Services in Beaconsfield at Junction 2 of the M40 approximately four miles northwest of the M25.

The Beaconsfield station will be the first hydrogen station in the UK to be integrated into the existing fuel forecourt, with the hydrogen dispenser located under the main fuel forecourt canopy.

The station will be deployed as part of the H2ME project and the OLEV HRS Infrastructure Grants Scheme and is co-funded by the FCH JU and the UK government.

ITM Power has previously been granted planning permission to construct hydrogen filling stations at the Shell Filling Station at Gatwick, together with the Extra Motorway Service Area Shell Filling Stations off the M25 at Cobham and A14 (M11) Cambridge. This makes a total of four consented forecourt sites and the current agreement with Shell is to build at three of these locations.

Commissioning of the HRS at Cobham is now underway following delivery of the electrolyser and buffer tank to the site. The HRS will open to the public in early 2017.

Jane Lindsay-Green, Shell UK retail future fuels manager, said: "We are pleased that Shell Beaconsfield received planning permission and are excited about the addition of hydrogen to the Shell UK network. It is another example of Shell's commitment to providing low carbon fuels for the future and we hope will provide further encouragement to other stakeholders to support and invest in hydrogen. Shell's experience from partnerships in Germany and the US shows vehicle manufacturers, fuel suppliers and governments need to work together for hydrogen mobility to succeed."

Dr Graham Cooley, CEO of ITM Power, added: "We are delighted to have achieved planning consent for the three refuelling stations that we are deploying jointly with Shell and look forward to updating the market on further developments in this exciting collaboration."

Andrew Long, CEO of Extra MSA Group, said: "Extra is pleased to be working closely with Shell on its alternative fuel strategy in conjunction with ITM Power and is proud to be helping to facilitate the provision of new HRS facilities on the Motorway Network at its strategic MSA locations."