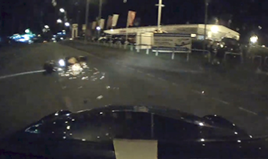 Footage from a fleet driver has shown a motorcyclist thrown from their bike in a collision with an oncoming car.

The accident takes place after a silver saloon car turns into his path just as he is overtaking a black Mercedes who is turning right at a road junction.

The biker narrowly avoids smashing head on into the silver saloon.

Sparks fly from his bike as he swerves to avoid the collision and he is left sprawling on the road.

The biker escaped with only minor injuries following the smash on the A665 in Ardwick, close to Manchester city centre.

The video, shot in June, has been released by vehicle CCTV firm SmartWitness to highlight the dangers of motorcyclists overtaking close to junctions as new figures show a record number of biker casualties on Britain's roads.

It was shot by one its fleet clients who have achieved rapid savings in their insurance claims after fitting the cameras to their vehicles.

Motorcyclists remain the most vulnerable road users, accounting for 21% of all road deaths in the UK last year, according to Department for Transport figures.

A total of 365 motorcyclists lost their lives, the equivalent of one per day.

This was an increase of 8% from 2014 and contrasts with a general downward trend for fatalities among other road users.

Almost half of all motorcycling accidents occur at junctions (45%) and 'a failure to look properly' was the most frequently cited cause of these accidents.

"While the majority of motorcyclists drive very safely, there is a growing minority of bikers who do take unnecessary risks and cause avoidable accidents.

"The Mercedes driver in this incident had a SmartWitness camera which captured the whole incident on film. He was able to show that he was blameless and that the accident was caused by the motorcyclist overtaking at the wrong time.

"The motorcyclist had a very lucky escape. It was a miracle that he only suffered a few minor injuries.

"While Britain's roads are getting safer, casualties involving motorcyclists continue to increase. We urge all motorcyclists to be extra-vigilant, particularly when they are travelling close to junctions."​