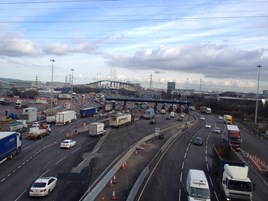 Fleets are being encouraged to remind drivers to pay the Dart Charge within 24 hours of using the Dartford Crossing.

The crossing, which introduced cashless payments in November 2014, is likely to be used more by drivers unfamiliar with the payment system over the Christmas period.

Drivers can pay in advance and have until midnight the day after travelling to pay for a crossing. Payment can be made online at www.gov.uk/dartcharge or by calling 0300 300 0120

Highways England has been engaging with fleets through an initial meeting with trade association ACFO to identify and address the issues faced by companies in terms of payments and web systems.

Most of the concerns are around the web portal, searching for/uploading vehicles, congestion and the length of time to receive PCNs, according to ACFO board director and Bauer group fleet and risk manager Debbie Floyde.

"At our meeting in December, Dart was able to demonstrate the enhancements made to the website which should launch in January and includes many of the suggestions made by our members," said Floyde.

"It was also able to explain the congestion in the tunnels, which is due to lorries and HGVs being in the incorrect lanes and having to be re-routed, and we have also had feedback that the turnaround time on PCNs has been significantly reduced.

"ACFO looks forward to continuing communication with both Dart and Highways England to ensure a trouble-free passage and process for all."

Dart Charge has also introduced a fleet-specific newsletter, which is available to download here.