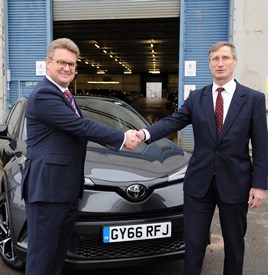 Oliver Woodmansee has been appointed managing director of AutoXP, a provider of vehicle demonstrator management services to motor manufacturers.

Simultaneously, AutoXP has enhanced its cloud-based XP Fleet Control (XPFC) operating system with a new franchise dealer rental vehicle module to further maximise utilisation and bring increased automation and efficiency to what has historically been a standalone administration process.

The dealer rental module is being trialled with a major vehicle manufacturer and its franchise dealer network in January and February with a view to it being made available to all AutoXP clients from March.

Woodmansee has a 20-year automotive industry career behind him and joined autoXP on Tuesday to continue to drive the organisation’s growth.

He joined Avis UK 13 years ago as corporate sales manager in the sales and commercial function having enjoyed spells with both Renault and then Toyota.

Woodmansee was appointed sales director of Avis UK in 2012 and takes up his new role at AutoXP having led the Avis business in the United Arab Emirates as managing director for three years.

Ed Sabisky, chairman and acting CEO of AutoXP, said: “Oliver joins at an exciting time in the history of AutoXP. We continue to further develop XPFC to meet manufacturer demands as they seek to maximise utilisation of demonstrator and other owned or supported vehicles.

“Additionally, AutoXP, in partnership with our manufacturer clients, has seen the potential to introduce new functionality to XPFC and expand its use into other operating areas, hence the development of the dealer rental module.”

In 2016, the company delivered more than 25,000 demonstrator vehicles on behalf of a growing portfolio of manufacturer clients.