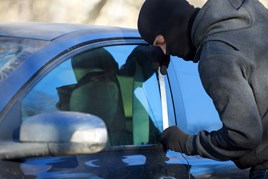 Tracker is warning advances in technology will also provide wider opportunities for thieves to compromise security.

In 2016, tests by German vehicle experts showed 24 cars from 19 different manufacturers vulnerable to an 'easily built' electronic device. This was backed by a report from the Home Office* which highlighted how organised thieves had adapted extremely well to modern security technology.

Andy Barrs, police liaison officer at Tracker said: “It’s safe to say that criminals became more sophisticated in 2016 in order to overcome vehicle immobilisers and keyless entry systems, using new, readily available technology. The need to buy this technology and the cost associated with it, may raise the bar sufficiently to deter many opportunist car thieves, but organised vehicle crime will continue to be rife in 2017.

“We have also seen an increase in the number of vehicles being stolen and exported to overseas countries, particularly within the African continent. Again, this is mainly led by sophisticated organised crime groups, who ship abroad high value vehicles stolen from the UK via containers at the UK’s ports.

“The good news is that manufacturers continue to invest in the electronic security of their remote access systems, to safeguard against criminals.   However, it’s probably fair to say that if car makers are ahead at the moment, their advantage is only slight and very short-term. With a raft of new prestige models scheduled to come onto the market in the next year, many offering the latest connectivity, we predict that there will be a continued focus on organised crime groups targeting high value vehicles.

“However, it’s important to note that traditional methods of stealing vehicles, such as obtaining car keys through a house burglary, won’t go away in 2017. With criminals the motto remains; where there’s a will, there’s a way.”