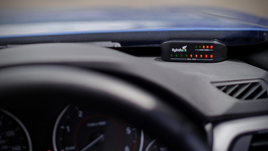 Lightfoot is partnering with Allianz Insurance to launch a new programme to encourage and reward better driving among UK fleets.

Beginning in February, Lightfoot Fleet Driver of the Week will give fleet drivers using Lightfoot the chance to win a series of great prizes.

Sponsored by Allianz Insurance, prizes will range from weekend breaks to spa and supercar days. All drivers have to do to be eligible for the weekly prize draws is achieve their weekly KPIs with Lightfoot, encouraging a higher level of driver efficiency.

The launch of ‘Lightfoot Fleet Driver of the Week’ is the latest innovation from Lightfoot, which continues to disrupt the telematics sector with new technology and solutions that improve driver and fleet efficiency.

Now, for the first time ever, better fleet drivers are to be directly recognised and rewarded. Additional categories and rewards will be introduced over time, extending the gamification credentials of Lightfoot, whose fleet customers already compete for best-driving status in Lightfoot’s national weekly leagues.

Mark Roberts, MD of Lightfoot, explained: “Lightfoot helps fleets save up to 20% on fuel and emissions while cutting accidents by as much as 60%. This is all thanks to the hard work of their drivers. Now we want to recognise and reward those doing their job brilliantly.

“We see Lightfoot as the ‘driver champion’ and our belief is that great driving deserves to be rewarded. That’s why we are proud to be partnering with Allianz Insurance to launch ‘Lightfoot Fleet Driver of the Week’.”

Jonathan Dye, head of motor insurance at Allianz Insurance, said: “Since partnering with Lightfoot in 2015, we have seen at first hand that their technology has a positive effect in reducing fleet customer claims.

“Allianz is delighted to support Lightfoot’s new initiative, which demonstrates our commitment to using new technologies to help our customers improve driver safety and efficiency.

Lightfoot customer and South West Water project manager Anthony Hooper added: “We’ve been using Lightfoot since 2014 with very positive outcomes across our fleet and we welcome Lightfoot’s move to introduce prizes and incentives to further encourage better driving - especially after seeing how successfully they have used a similar approach with private motorists.”